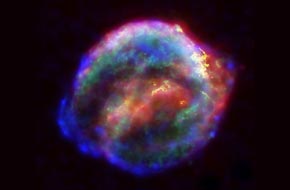 Data from three space-based telescopes show the Kepler supernova remnant in multiwavelengths. The blue and green regions depict the X-ray data (Chandra X-ray Observatory), the red represents the infrared emitting regions (Spitzer Space Telescope), and the yellow areas are the visual observations of the remnant (Hubble Space Telescope). In some areas the blue, red and green data combine to appear white.

At the American Astronomical Society conference in Seattle on Tuesday, independent teams of astronomers reported new results about supernovae, the cataclysmic explosions of stars. These results clarify one mystery, while challenging fundamental assumptions about what types of stars can go kaboom.

Stephen Reynolds (North Carolina State University) and his colleagues have cleared up contradictory observations surrounding the remnant of a supernova seen by the great astronomer Johannes Kepler and others in 1604 — the most recent widely observed supernova in our Milky Way Galaxy. By taking deep exposures with NASA's Chandra X-Ray Observatory, Reynolds's team found abundant X-rays from iron, but very little from oxygen. This is the classic signature of a Type Ia supernova — the thermonuclear detonation of a white dwarf that
approaches the famous Chandrasekhar limit of 1.4 solar masses. In contrast, Type II supernovae produce large quantities of oxygen.

Some previous observations, such as the lack of a neutron star left behind by the explosion, supported the possibility that the Kepler supernova remnant was from a Type Ia event. But other data suggested a Type II event, which comes from the explosion of a very massive star. But the new observations conclusively put it in the Type Ia category. "The bottom line is that this was a thermonuclear explosion," says Reynolds. "Iron is everywhere and oxygen is hard to find."

Reynolds notes that the remnant is embedded in much thicker gas than most Type Ia supernovae, which had previously been cited as evidence for the event being a Type II explosion. But Reynolds points out that the system as a whole might have been more massive than most Type Ia supernovae, and that perhaps the white dwarf’s companion star shed considerable amount of gas in a stellar wind just as the white dwarf exploded. The supernova blast wave would have plowed through this material, heating it up and increasing the event's luminosity. This idea fits in nicely with recent observational evidence that Type Ia supernovae can vary in luminosity, and that there might be more than one class of progenitor.

As for the progenitors of Type II supernovae, standard stellar-evolution theory predicts that they are produced by the explosive deaths of red supergiants. But the closest supernova of the past several centuries, Supernova 1987A, came from the death of a blue supergiant — a star that is much hotter and more compact than a red supergiant. Nathan Smith (University of California, Berkeley) presented evidence that a class of blue supergiants known as luminous blue variables (LBVs) can produce Type II supernovae. LBVs are notorious for ejecting large amounts of mass in sporadic, violent outbursts.

Hubble Space Telescope images of SN1987A show three rings around the expanding shell of debris. The rings came from material ejected by the progenitor several thousand years before it exploded. Smith found two other LBVs that have produced rings that almost exactly mimic those produced by SN1987A's progenitor, and a third was imaged by Hubble several years ago. These observations, along with studies of several recent supernovae in distant galaxies that were probably produced by LBVs, suggest that these stars can explode without ever passing through a red-supergiant phase. Moreover, the nearest LBV, Eta Carinae, is ejecting a thick nebula known as the Homunculus that has the same bipolar shape as the rings surrounding SN1987A and the other three LBVs. 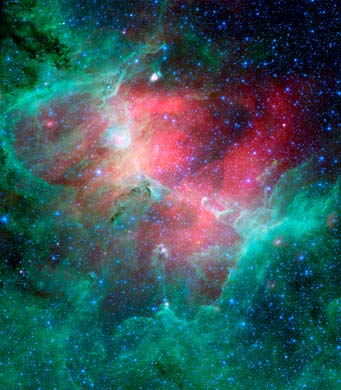 Have the Pillars of Creation in M16 already been destroyed by the shockwave of a supernova blast?

If Smith is correct, Eta Carinae and these other three LBVs could explode at any time. "These stars were not thought to be at a stage of their life where they're ready to explode, but maybe they are," says Smith.

A third group, led by Nicolas Flagey (Spitzer Science Center/Institut d'Astrophysique Spatiale, Orsay, France) reported evidence for a past supernova in the Eagle Nebula (M16), near the famous "pillars of creation" imaged by the Hubble Space Telescope in 1995. A Spitzer image shows a round-shaped region of hot gas that fills a cavity near the pillars, which are 7,000 light-years from Earth. Flagey says this gas was possibly heated by a supernova shock wave several thousand years earlier. Flagey speculates that the supernova's shock wave has already destroyed the pillars and that the light carrying news of that event is en route to Earth. But other astronomers vehemently dispute this interpretation, noting that the supernova's shock wave would have compressed and heated the surrounding gas, generating much brighter radio and X-ray emission than astronomers have observed from that region. 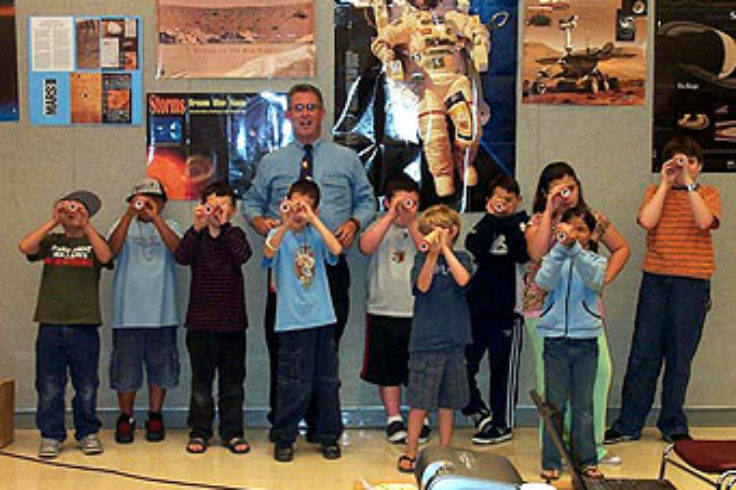