The central galaxies in big clusters are thought to be bereft of stellar nurseries. They’re bathed in hot, X-ray-emitting gas, too superheated to form cool, star-forming clouds. The likely thermostat regulator in this setup is the galaxy’s gas-gobbling central black hole, which blasts out jets and radiation like a tempestuous radiator.

In 2012, my colleague reported the discovery of cool gas filaments feeding the central galaxy in the Phoenix Cluster, which contains on the order of a thousand stellar metropolises. The galaxy was so gorged with gas that it was churning out about 700 Suns’ worth of stars each year — one of the highest rates in the modern universe. Clearly, when it came to starbirth, this galaxy was a veritable obstetrics ward.

The next course of action was to look at the system with the ALMA radio array, to better assess just how much cold gas was available for star formation.

Members of the original team have now done just that. Reporting in the February 10th Astrophysical Journal, Helen Russell (University of Cambridge, UK) and colleagues found that the galaxy’s black hole is powering intense jets which have inflated huge bubbles of hot gas (visible in X-ray observations). Seemingly wrapped around these cavities are three gigantic filaments of cold, molecular hydrogen gas — the stuff that stars are made of. Each filament is tens of thousands of light-years long.

It’s unclear if the gas clouds were lifted and elongated by the bubbles as they expanded from the galaxy’s core, or if they formed draped this way along the edges due to instabilities in the gas as the hot stuff rose.

Either way, it’s clear that such bubbles sculpt the structure of the largest gas clouds in not only this galaxy but other clusters’ central galaxies, too. Astronomers have seen hints of filament-wrapped cavities before, but not as clearly: the gaseous strands have generally been messier, says Megan Donahue (Michigan State University).

Donahue’s team has looked at more than two dozen central galaxies as part of the CLASH project, which used the Hubble Space Telescope to study clusters in a whopping 16 wavelengths. The observers have seen very similar filaments in their systems, some even with stars forming inside. Those that are forming stars rank among the most prolific starbirthing galaxies in the universe’s last 5 billion years.

“It’s kind of ironic, because they’re ‘supposed’ to be red and dead,” Donahue says.

Yet the two CLASH galaxies with the largest starburst rates (about 100 solar masses per year) still pale in comparison to the Phoenix’s central galaxy. “Phoenix is an extreme and extraordinary system, so we have to be careful not to think of it as too typical,” she cautions.

Atypical though it may be, the Phoenix system is yet one more result supporting astronomers’ conviction that the gas in these galaxies undergoes a cycle of cooling and heating, controlled by the black hole thermostat. The Phoenix and CLASH galaxies are catching this process in the act.

Read more about the result in NRAO’s press release.

Who rules the roost, black holes or galaxies? Find out more in our February 2017 feature.

While interesting, the use of "bubble" and "cavity" were unclear. A bubble is a spherical shape. However the jets would not be spherical. 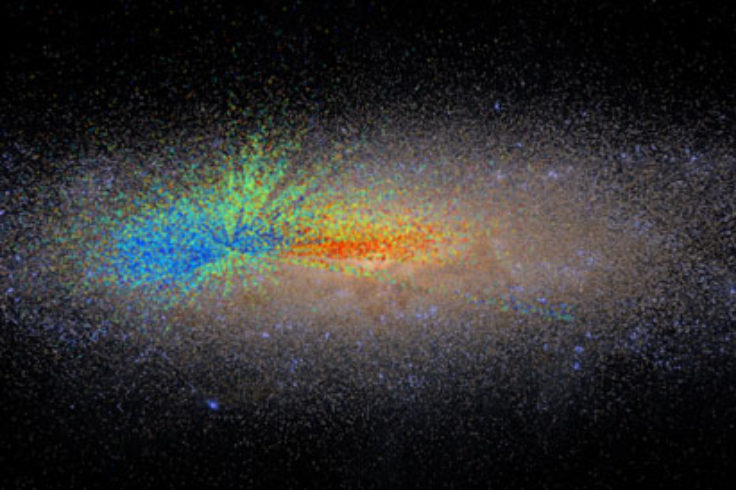