Astronomers have discovered a supermassive galaxy cluster that both meets and challenges expectations for how clusters ought to behave. 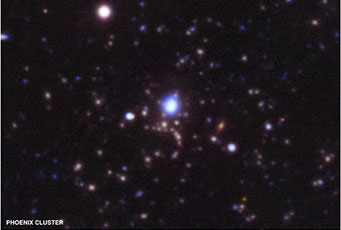 The Milky Way measures almost 100,000 light-years across, a distance that defies imagination. But clusters of galaxies, the largest gravitationally bound structures in the universe, span tens of millions of light-years. Viewed in visible light, galaxy clusters look like their name — dozens, sometimes thousands of galaxies swarming amid the voids of space.

But view the same cluster with X-ray vision, and you’ll mostly see a huge, glowing blob. You’re seeing extremely thin, superheated plasma filling the space between galaxies. As you might expect, the multimillion-degree plasma is densest near the cluster’s middle, where it’s compressed under its own weight. This superhot gas radiates heat away with intense X-rays, so it ought to cool quickly. The densest gas in the core should cool the quickest, followed by thinner gas from the edges of the cluster. 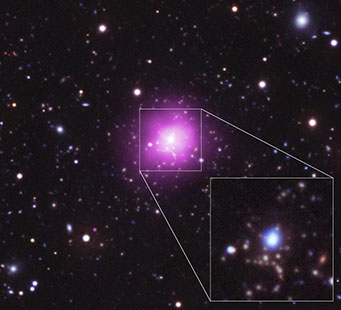 In this composite image, the super-hot gas filling the Phoenix galaxy cluster glows brightly in the X-rays (purple). Individual galaxies show up in visible light, and ultraviolet light, much of which comes from newborn stars, shines from the cluster's center (blue).

All this newly cooled intergalactic gas should sink to the core of the cluster, where a single massive galaxy tends to reside, and condense into stars, almost like cooling water vapor condensing into raindrops. Yet astronomers have found precious little star formation at the center of most galaxy clusters, even those with cooling gas. Until now.

A paper published in Nature today describes observations of one of the most massive galaxy clusters discovered to date. The cluster SPT–CLJ2344-4243, nicknamed Phoenix for its constellation (and pronounceability), weighs in at roughly 2 million billion times the mass of our Sun, or a couple thousand Milky Ways, putting it in competition with heavyweight champion El Gordo. The cluster is almost as young as El Gordo too — its light took 5.7 billion years to arrive at Earth, meaning we see it back when the universe was only 8 billion years old. But the Phoenix’s crowning jewel is the bright ultraviolet light radiating from its core, emitted from newborn stars forming at the prodigious rate of 740 solar masses per year. 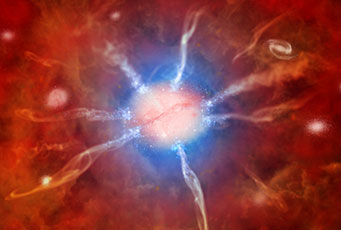 Cooling gas is flowing into the galaxy at the very center of the Phoenix cluster, probably along radial filaments as pictured here in this artist's illustration.

The new stars are likely forming out of the intergalactic gas, which is cooling and flowing into the cluster center at a rate of 4,000 solar masses each year, probably along radial filaments like spokes on a wheel.

With such a high star formation rate, “this is clearly an extreme object,” says Chis O’Dea (RIT), who was not involved in the study.

There’s only one problem: expectations of cluster behavior have changed. To explain the rarity of cooling flows and central star formation in other galaxy clusters, astronomers had to come up with a theory — something must be reheating the gas. And a likely culprit is the supergiant galaxy, often more than 1 million light-years across, that reigns over the center of most large clusters. In the extra-big galaxy’s heart lurks an extra-big supermassive black hole. If jets stream out from the black hole and heat the gas, blowing gigantic bubbles in the process, that would make the gas too hot to form stars effectively.

So if the Phoenix cluster’s core is churning out stars, then it must be going through a brief period where jets from the supermassive black hole haven’t been “on” long enough to reheat the cooling gas.

“We suspect that this strong cooling/star formation episode will only last for around 100 million years, or roughly 1% of the cluster’s lifetime,” says Michael McDonald (MIT), the study’s lead author. “So, even if this short-lived phase is ubiquitous, we still shouldn’t see it in many clusters.”

“Further observations of the cold gas reservoir from which stars are formed will be very important,” suggests Andrew Fabian (University of Cambridge), who was not involved in the study. For example, telescopes such as ALMA could determine how much fuel exists for star formation.

“It will be exciting if similar objects at even higher redshifts are found,” Fabian adds.

The star formation is only about 1E+8 years old compared to the big bang age of 13.7E+9 years old universe and the cluster age of about 1E+10 years old so we are looking at evidence of a recent origin. The astronomers admit they see "short-lived" phenomena so this raises the question, are we living in a special place and time that allows astronomers on earth today to observe this?

Is the inter-galactic gas all hydrogen, or has it been processed? If it's all hydrogen, then these stars might look like 1st-generation stars, but born 8 billion years later than the vast majority of 1st-gen stars.

I'd like to tackle Rod's question, if I may.

"... are we living in a special place and time that allows astronomers on earth today to observe this?"

According to the theory, statistically we could find others at different distances but only 1 percent or fewer would be in this stage. The only caveat would be if this stage is related to a particular period in the life of a super cluster, for instance, mid-life, in which case we would expect more of these similarly aged clusters to exhibit similar characteristics.