Afghans Reach for the Stars

The Reach for the Stars project will start this fall to distribute astronomy textbooks to Pashto-speaking schoolchildren. 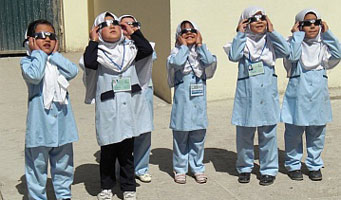 Reach for the Stars

When you think of Kabul, the capital city of Afghanistan, what do you see? You may not immediately think of schoolchildren gazing at the Sun through solar filters, or of astronomers observing under dark night skies. But astronomy educator Christopher Phillips hopes to change that with Reach for the Stars, a program that aims to bring astronomy back into Afghanistan’s elementary school curriculum in a way that resonates with the region’s culture and history.

Phillips is collaborating with Astronomers Without Borders, Afghanistan Astronomy Association, and Imperative Space to have volunteers deliver educational materials — everything from pencils and paper to astronomy supplies such as solar shades — to the country’s schools, orphanages, and refugee camps.

Key to this effort is Little Book of Stars, an elementary-level textbook that explains basic astronomy concepts with cartoon illustrations. The book comes with a curriculum of classroom activities, including a hands-on activity where students use their bodies to mimic the movement of celestial bodies.

Phillips has already written the book’s text, which Mujtaba Ilmi translated to Pashto — the second official language of Afghanistan. The next step is to create illustrations, with extra care to make sure the images are culturally correct. For example, the clothes must be appropriate, and if a boy and girl are shown playing together, an adult guardian must also be shown in the picture.

Now that the Taliban are gone, people are once again doing the things they used to enjoy, like fly kites, play music, and even observe the night sky. So now is a good time to build a foundation for the country’s development. “The Taliban said that the heavens are the realm of Allah and should be left alone,” Phillips says. “But this is actually contrary to what Islam says about astronomy.” 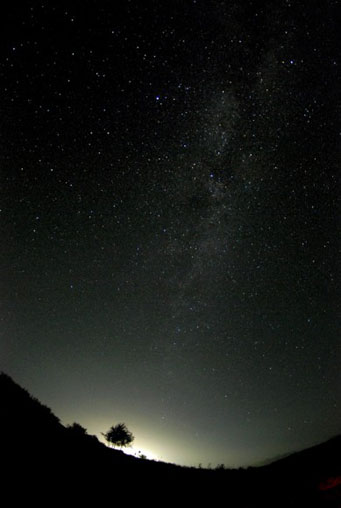 Yunos Bakhshi took this picture of the Milky Way above the bright lights of Bagram military base and submitted it to The World at Night (TWAN).

Any sort of educational activity out in the country and especially in Taliban-controlled areas remains risky. “The Taliban have forced schools to close; they’ve made acid attacks on students,” Phillips says. “The Taliban just don’t want people to be educated — fullstop.” Instead, they educate boys in madrasas, indoctrinating them in extreme ideology, and girls get no education at all.

Despite these dangers, Phillips says that 90% of the country is accessible and likely safe. Kabul especially is a relatively safe location. Despite its population of over 3 million, the city is not heavily light-polluted and its beautiful night sky remains relatively unspoiled.

“In Afghanistan, you have a blank canvas to a certain extent when it comes to education,” Mike Stone, the United Kingdom’s contact for Reach for the Stars, told BBC in an interview. “The children of Afghanistan are very eager to learn.”

“The history of Islam and astronomy is incredible, and anyone who picks up a star map instantly comes into contact with that history,” Phillips notes. He points to the Arabic and Persian names that are scattered throughout astronomy: the names of stars, such as Aldebaran, Altair, Rigel, and Vega, words like zenith and azimuth, even the field of algebra.

The goal doesn’t end with astronomy, Phillips stresses. He emphasizes that astronomy is a gateway science, drawing students in with the beauty of the night sky. Once children are fascinated by astronomy, they quickly take to learning about the science behind the beautiful images, and about the equipment and the math involved.

The program is due to begin distributing materials this fall. So right now, the project founders are focusing on laying the groundwork. Phillips relies on amateur astronomer Yunos Bakhshi, founder and head of the Afghanistan Astronomy Association, to sign up schools and volunteers willing to participate in the program. Bakhshi, who lived in exile during the Taliban’s rule, is intensely passionate about establishing an astronomy program in his war-torn country. He writes on the AAA’s website, “We try by wiping off the gun smoke from Afghanistan sky, to show the beauty and mysterious of Universe to all Afghans.” 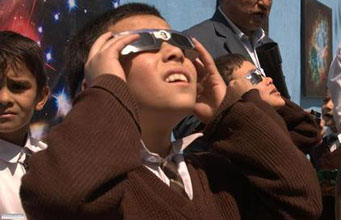 The book will be distributed to Pashto-speaking schoolchildren.

Reach for the Stars

“We want to enroll schools where the majority of children are Pashto speakers. We also want to distribute the book among children in refugee camps,” Baskhshi explains. “Up to date, all schools faced us with enthusiasm and love.”

The vast majority of volunteers that have signed up to deliver materials and lead classroom activities are local Afghans, “which is exactly what we wanted,” says Phillips. “We really want this to be Afghan-built, Afghan-led.”

Another facet of the program is a cultural exchange project. Kite-flying was a rich historical tradition in Afghanistan before the Taliban banned it, and is now enjoying a comeback since the Taliban’s fall in 2001. As part of the Reach for the Stars project, schoolchildren in Hawai’i, which also has a strong kite-flying tradition, will send handmade kites to Afghan schoolchildren, connecting two very different cultures on common ground.

Phillips acknowledges that Reach for the Stars is currently underfunded, but he remains determined. As the only international participant traveling to Afghanistan as part of the project, he says, “Come hell or high water, I’m going to Afghanistan, even if I have to fund it myself. We’ve made a promise to these people.”

For more information about the project, visit the Reach for the Stars site.

This is a heartwarming story. Best wishes to the folks bringing astronomy into Afghan classrooms. The sky has no borders and belongs to every human being equally.

Yes Anthony, the core of this article is heartwarming. But the part of the story dealing with the reason for the need for this “Reach for the Stars” program is bone chilling. Here we see one of the most extreme examples of religiously fostered ignorance. But looking at this from a historical perspective however, and we see that barbaric acts have begotten more barbarism. The religious wars of today are the fruitage of the seeds of hatred sown during Christendom’s dark ages. During the era of the Crusades and the Inquisitions church leaders repressed knowledge, even as the Taliban and others still do today. For centuries, people were persecuted and sometimes even killed for translating or distributing Bibles, and the fomenters of this persecution were the leaders of the nominally “Christian” churches. This history is an unpleasant truth, but it is true, none the less. I join you in well wishing to the ones helping Afghani children learn about astronomy. All peoples need to learn that our planet is a small place in a very big universe.