After narrowly avoiding the budget ax, the Stratospheric Observatory for Infrared Astronomy (SOFIA) is nearing its first flight. A joint project of NASA and the German Space Agency (DLR), SOFIA is a Boeing 747SP with a 2.5-meter (98-inch) telescope looking out a large hole in its side, behind the port (left) wing. 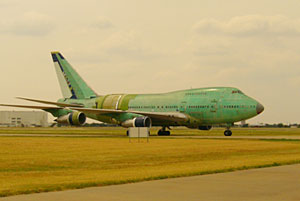 On August 19, 2006, the as-yet-unpainted Stratospheric Observatory for Infrared Astronomy (SOFIA) taxied under its own power for the first time in Waco, Texas, where the Boeing 747SP aircraft was heavily modified to carry a 2.5-meter (98-inch) telescope.

Flying above 99% of the infrared-absorbing water vapor in Earth's atmosphere, it will complement the Spitzer Space Telescope and other spaceborne infrared observatories.

Last week pilots brought SOFIA's new engines to full power for the first time since the aircraft's refurbishment was completed. They also taxied around the facility in Waco, Texas, where contractor L-3 Communications has spent the last few years modifying the plane and installing the German-built telescope. You can download a video of the taxi test from the SOFIA Web site.

According to SOFIA astronomer Dana Backman (SETI Institute & Universities Space Research Association), the aircraft will enter a paint hangar on August 29th for application of its final blue-on-white color scheme. He adds, "We're still on track for first flight in November."