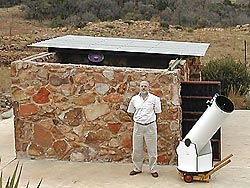 Berto Monard with his home observatory. The location goes by two names: Bronberg Observatory, named for the South African ridge where it resides, and CBA Pretoria, a designation given by the Center for Backyard Astrophysics.

Dubbed GRB 030725, the burst was first spotted by the NASA/Massachusetts Institute of Technology High Energy Transient Explorer-2 (HETE-2) spacecraft, which immediately relayed its approximate coordinates to astronomers worldwide. The American Association of Variable Star Observers (AAVSO) sent the coordinates to its own worldwide army of amateur astronomers via the organization's International High-Energy Network. More than 170 amateurs in 22 countries are currently signed up to receive AAVSO's e-mails, pager beeps, or cell-phone calls whenever a GRB is detected. Hundreds more participate in discussion groups about such high-energy events.

Monard is an active observer of cataclysmic variables for the Center for Backyard Astrophysics and an accomplished amateur astronomer with 10 supernova discoveries to his credit. He received the AAVSO alert and went hunting in the 30-arcminute-tall search area where the burst was thought to be fading. Armed with a 12-inch (30-centimeter) Schmidt-Cassegrain telescope and a CCD camera, he took more than twenty 45-second exposures and digitally stacked them atop one another. His efforts revealed a very faint, anomalous object near the top edge of the search area.

Berto Monard was the first amateur astronomer to discover the fading afterglow of a gamma-ray burst before any professionals. On July 25th, he watched as the object faded from magnitude 18.8 to 19.6 in just 3.6 hours.

"Inspection of the resulting image didn't show any new objects in this 'easy' field, but there was a smudge toward the north of the image, which looked like it might be an artifact or possibly an infrared source," wrote Monard. Followup images showed that the "smudge" was fading, and fast! That evening, as Monard watched, it dropped from magnitude 18.8 to 19.6 in just 3.6 hours.

Monard's ability to beat professionals to the punch with his afterglow discovery came from a combination of preparation and opportunity. His first advantage was location — GRB 030725 was located at nearly –51° declination, in the constellation Indus, putting it out of the reach of Northern Hemisphere instruments. The discovery was also made during the International Astronomical Union's General Assembly in Sydney, Australia, while many southern-sky astronomers were away from their scopes.

Monard's find also served as an affirmation of the AAVSO's International High-Energy Network. "This is a perfect example of a wonderful pro-am collaboration," says Janet Mattei, director of the AAVSO. Amateur astronomers, working in tandem with professionals, ensured that this GRB was recorded. "It's a real pro-am success story."

And this is only the beginning. When NASA's new gamma-ray satellite, Swift, launches in January, it aims to locate more GRBs than professional astronomers may be able to follow. "I envision amateurs making many more discoveries," adds Mattei.