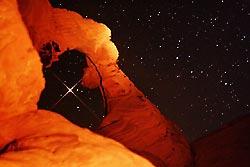 Wally Pacholka captured this view of Mars inside Arch Rock last July 21st at Nevada's Valley of Fire State Park. This photo appeared as one of TIME magazine's 'Pictures of the Year' for 2003.

A California amateur astronomer recently received a unique double honor by having two of his Mars images featured in two well-known publications. Wally Pacholka's portraits of the red planet last July 21st over Nevada's Valley of Fire State Park near Lake Mead were chosen by TIME and LIFE magazines for their respective editions of pictorial highlights of 2003. His photo of brilliant Mars shining through Arch Rock was published as one of TIME's "Pictures of the Year" last December 22nd, while his image showing the planet next to a formation called Poodle Rock is in LIFE's "The Year in Pictures." (The latter was featured in Sky & Telescope's December 2003 Gallery, page 139.)

"I had actually traveled to the park six times — each a 700-mile roundtrip — over several months specifically to photograph Mars, as I wanted to shoot the red planet from a place that looked like Mars," Pacholka explained.

In addition to the Valley of Fire, he also traveled extensively to other parks such as California's Mammoth Lakes, June Lake, Hume Lake, Sequoia, Yosemite, Death Valley, and Joshua Tree, Utah's Arches and Canyonlands, as well as Monument Valley in Arizona. In all, he took more than 4,000 images and drove thousands of miles to get that pair of perfect shots. 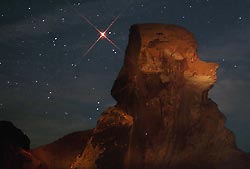 Pacholka captured this scene of Mars over Poodle Rock last July 21st at Valley of Fire State Park. He used a Fuji S2 Pro digital SLR camera (set at ISO 1600) and a 50-millimeter f/2.4 lens for this 20-second exposure. A flashlight was used to illuminate the rock formation. This was featured in LIFE magazine's 'The Year in Pictures 2003'. You can see more of Pacholka's astro images on his Web site.

"Of all the places I visited, nothing compared to the Valley of Fire, with its incredible natural formations like Poodle Rock and Elephant Rock," he wrote. "My biggest fear was that TIME and LIFE would just go with a Hubble image of Mars. However, having the experience behind me that the public in general enjoys seeing something that it can relate to, I stuck to my simple equipment setup — a 35-millimeter digital SLR camera on a fixed tripod — and a simple formula of capturing celestial events, such as Mars against a star-filled sky, with a scenic foreground that looked like Mars."

You can read more about his astro-imaging exploits in the Web site of the Orange County Astronomers.