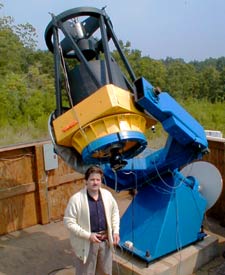 The Puckett Observatory is a private facility in Mountain Town, Georgia, owned and operated by Tim Puckett. The workhorse for his Puckett Observatory Supernova Search (POSS) is this homebuilt 0.6-meter (24-inch) f/8 Ritchey-Chrétien automated telescope. To date, he and his POSS team have discovered 100 supernovae.

An international team of volunteer amateur astronomers, known as the Puckett Observatory Supernova Search (POSS), has made its 100th supernova discovery. Ajai Sehgal, Jack Newton, and Tim Puckett found the 18th-magnitude stellar explosion, designated 2005cy, in the galaxy UGC 11241 in Draco on CCD images taken with a 0.5-meter (20-inch) reflector at Sehgal's observatory in Osoyoos, British Columbia, on July 15th. The discovery was confirmed the following night by fellow POSS member Doug George in Ottawa, Ontario.

Shortly after the Central Bureau for Astronomical Telegrams announced the find in IAU Circular No. 8569, astronomers used a spectrograph on the 200-inch Hale reflector at Palomar Observatory in southern California and determined SN 2005cy to be of Type IIn, which represents the violent demise of massive stars whose cores have collapsed.

Created by Puckett in 1998, POSS images some 1,200 to 1,600 galaxies every clear night from dusk to dawn using computer-controlled telescopes: an array of 24-, 20-, and 14-inch scopes at the Puckett Observatory in Mountain Town, Georgia, and the 20-inch reflector in Osoyoos. Except for the 14-inch, all these instruments were built by Puckett. 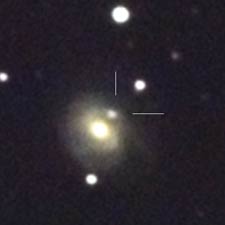 Supernova 2005cy was discovered on July 15th. This unfiltered tricolor CCD exposure shows the 17.9-magnitude stellar explosion (with tick marks) in the galaxy UGC 11241 in Draco.

To date, Puckett and his POSS team have taken more than 850,000 images, which are distributed via the Internet. Each image is then manually checked, "blinking" (comparing) it with those in the archives. Puckett spends approximately 40 to 50 hours a week running the scopes and analyzing data. The other 28 members of the team from five countries each have contributed thousands of hours to the program.

"The key is the Internet and the collaborative spirit of its members, allowing cooperation between amateur observatories all around the world," says Puckett. He plans to add a new observing station in South Africa this year to provide better sky coverage and to increase POSS's discovery rate.