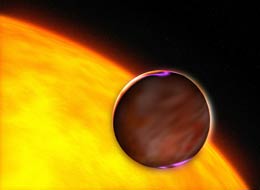 Artist Greg Bacon created this impression of the extrasolar planet XO-1b, recently discovered by a team of professional and amateur astronomers. Click on the image to view a larger version.

For the first time, amateur astronomers have made a major contribution to the discovery of a transiting extrasolar planet. Such planets periodically cross the face of their parent star, causing a dip in brightness that generally lasts several hours. Transiting planets are of particular importance to professionals because follow-up studies with space telescopes such as Hubble and Spitzer can reveal the planet's temperature, atmospheric composition, and cloud coverage.

Professional astronomer Peter McCullough (Space Telescope Science Institute) led the discovery team, known as the XO Project. McCullough and his colleagues monitor the brightnesses of tens of thousands of relatively bright stars (brighter than 12th magnitude) every clear night with two automated 200-millimeter telephoto cameras on Haleakala, a volcano on the Hawaiian island of Maui. The team uses CCD detectors, and sophisticated software to identify potential transiting planets from the vast amount of data. 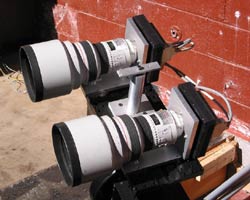 The XO Project uses this inexpensive telescope to monitor the brightnesses of tens of thousands of stars every night. The telescope consists of two 200-millimeter telephoto camera lenses. The lenses are attached to CCDs, which can measure slight dips in star brightnesses that reveal a transiting planet. The telescope is on the summit of Haleakala, a volcano on Maui.

In June and July 2005, four amateur astronomers (Ron Bissinger in California, Bruce Gary in Arizona, Peter Howell in Massachusetts, and Tonny Vanmunster in Belgium) observed one of the most promising candidates identified by XO: a magnitude-11.3 solar-type star in Corona Borealis named GSC 02041—01657. The amateur observations revealed the telltale dips of a transiting object only 30 percent larger than Jupiter. The star decreases in brightness by about 2 percent for about 3 hours. The transits occur every 3.94 days — the companion's orbital period.

To make sure the transiting object was a planet and not a low-mass star or brown dwarf (which are about the same size as a gas-giant planet), McCullough conducted follow-up spectral observations with two telescopes at the University of Texas's McDonald Observatory. Sure enough, the spectra proved that the star wobbles back and forth as it its being tugged by a companion with about 90 percent of Jupiter's mass. The XO team had bagged its first planet, which it has named XO-1b.

"The amateurs could not have discovered this planet without my telescope telling them where to look," says McCullough. "But when they found the drops in brightness of XO-1, that was important. We probably could have done this eventually without their assistance, but it certainly accelerated the process. And it's much more fun to do it this way."

"Over several weeks, one by one, I worked through the candidate list and reported negative findings back to the team," writes Bissinger on his Web site. "But as my computer displayed a light curve on the morning of June 23, 2005, after my telescope and CCD camera took 337 one-minute images of one particular candidate throughout the night before, there was little doubt in my mind that a new exoplanet had been discovered." 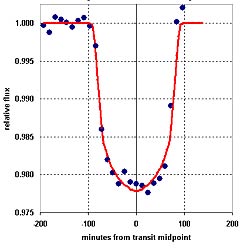 Amateur astronomer Ron Bissinger obtained this light curve on the night of June 22-23, 2005. The light curve clearly records the dip in brightness of the host star, XO-1, during the transit.

XO-1b is the tenth exoplanet known to transit its parent star, and its one of the five whose stars are bright enough to enable detailed follow-up study. The planet is approximately 0.05 astronomical unit from its host star (1/20th the Earth-Sun distance), making it a "hot Jupiter" that is almost certainly unable to support life.

The star itself is a near-identical solar twin, adding to the scientific interest. The planet's density is only about 50 percent that of liquid water, meaning it's less dense than any of the solar system's planets. The only transiting exoplanet with a lower density orbits the star HD 209458. McCullough has been awarded time on the Spitzer Space Telescope to learn more about the system, and he has applied for time on the Hubble Space Telescope.

McCullough also notes that further observations may reveal variations in the timing of the transits, which would indicate the presence of additional planets in the system. This method could, in principle, yield the discovery of Earth-mass planets around stars with transiting planets, if those planets are in resonant orbits with the transiting planet.

"I hope this announcement will attract other people interested in doing this," says McCullough. While he notes that it's relatively easy for amateurs to detect the transits of XO-1b with almost any telescope and CCD, they need to be able to measure the brightnesses of stars to a precision of a few millimagnitudes per measurement to contribute to the XO project. 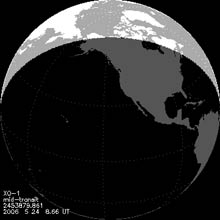 Click on this link to view a strobe movie that shows when the transits of XO-1b are visible from particular locations on Earth.

"It's pretty exciting to be part of this project," says Bissinger, who has caught the transits of four other exoplanets. "Hopefully this will help recruit more amateurs to do science with their scopes."

"It's very exciting to see some well-known amateurs coming in as coauthors on such an important discovery," says Greg Laughlin (University of California, Santa Cruz), who has helped organize the Transitsearch.org amateur network for exoplanet transit searches. "The photometry that they are getting is extremely good, and they constitute a very flexible network that can be effectively tapped by projects like XO. I'm really happy to see that the system is working."

The discovery paper has been accepted for publication in the Astrophysical Journal.