Robert Gendler stitched together a stunning mosaic of spiral galaxy M106, filling in gaps in Hubble coverage with his own and Jay GaBany's ground-based observations. 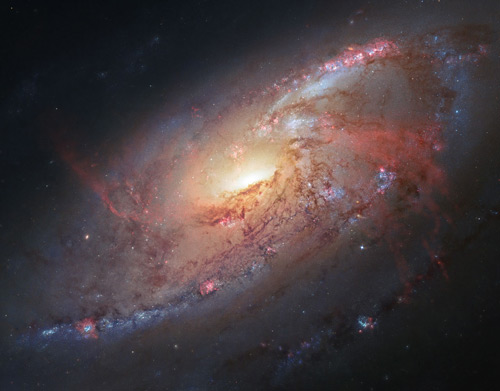 Robert Gendler created this image by combining Hubble observations of M106 with additional ground-based observations from his own and Jay GaBany's telescopes. Click for a larger version.

Enjoy a little deep-space beauty to help you over the Wednesday hump. M106, a magnificent spiral galaxy, lies just 23.5 million light-years away in the constellation Canes Venatici. Hubble Space Telescope captured this stunning image with the aid of Robert Gendler, a physician, amateur astronomer, and S&T contributing photographer. Gendler retrieved archival Hubble images of M106 to assemble a mosaic of the galaxy’s center, filling in the gaps where Hubble had little or no coverage with his own and fellow astrophotographer Jay GaBany’s observations.

Besides being beautiful to look at, the galaxy hosts a tantalizing oddity. At M106’s heart, a black hole feeds on churning gas, and that’s what’s responsible for this image’s bizarre feature: the two red arches that look like “extra” spiral arms. Unlike normal spiral arms, which are made of stars, the red arches are made of hot gas. Astronomers theorize that as the central black hole feeds, it burps jets of material that send shock waves through galactic gas, setting it aglow.

This image is also today's astronomy picture of the day: