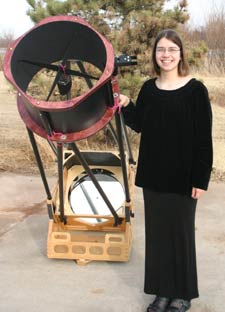 Each year since 1993 the Astronomical League has recognized outstanding astronomy achievements by US high-school students through its National Young Astronomer Award (NYAA). This year's top winner is Mary Masterman, a junior at Westmoore High School in Oklahoma City, Oklahoma.

A member of the Oklahoma City Astronomy Club, Masterman is cited for her accomplishments in the field of spectroscopy. She used an inexpensive homemade Littrow spectrograph coupled to a 12-inch telescope and a CCD camera to study the composition of stars and nebulae as well as stellar spectra and temperatures. Her body of research work has already won numerous cash prizes and scholarships at Intel's International Science and Engineering Fair in 2004, 2005, and 2006. She has also presented her findings at the American Astronomical Society meeting last January and at the Mid-America Regional Astrophysics Conference last April.

Masterman's NYAA prize consists of a plaque, an all-expense-paid trip to the League's 64th national convention in Dallas-Fort Worth, Texas, this August, a 10-inch f/10 LX200R Ritchey-Chrétien telescope donated by Meade Instruments Corporation, a lifetime observing pass to McDonald Observatory, courtesy the University of Texas, and complimentary membership to the International Dark-Sky Association.