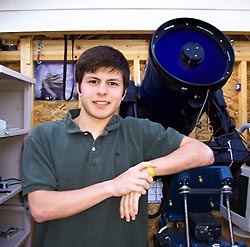 The Astronomical League has recently announced the winners of its 2005 National Young Astronomer Award (NYAA). Established in 1993, this annual award recognizes outstanding astronomy achievements by US high-school students. This year's top winner is Christopher Limbach, a senior at Marquette University High School in Milwaukee, Wisconsin.

A member of the Milwaukee Astronomical Society, Limbach is cited for his research on eclipsing binary stars, particularly his light-curve analysis of EP Aurigae and his computer modeling of 10 binary star systems using photometric B-V magnitude data. You can see his work as well as CCD images from his home-built observatory at his Web site.

Limbach's NYAA prize includes a plaque; an all-expense-paid trip to the League's national convention in Kansas City, Kansas, this August; a 10-inch LX200 GPS telescope donated by Meade Instruments Corporation; and a lifetime observing pass to McDonald Observatory, courtesy the University of Texas. 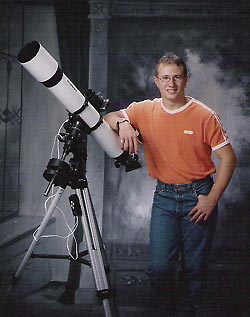 Second-place winner Kevin Iott's ambition is to pursue a career in the astronomical field, designing and building telescopes. Recently he has been collaborating with 2004 NYAA winner John Davis in developing and fabricating telescope mounts.

Second- and third-place honors went to Kevin Iott (Petersburg, Michigan) and Benjamin Jones (Helotes, Texas), respectively. Iott is an accomplished telescope designer and builder whose machined mounts have won awards at the 2004 Stellafane convention and the Michigan Industrial and Technology Education Society competition. Jones, a high-school junior, is a skilled visual observer and a leading light-pollution activist in his hometown. For their achievements, Iott will receive a plaque, an all-expense-paid trip to the League's convention, a Meade ETX 125 telescope, and a lifetime pass to McDonald Observatory, while Jones will be mailed a plaque.

The Astronomical League is an umbrella organization representing 265 amateur clubs and more than 18,000 members nationwide. For more information about the League and the NYAA, go to its Web site at www.astroleague.org.