An Early Universe Teeming With Stars 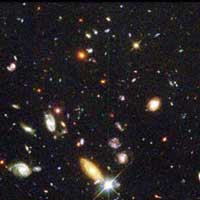 A small piece of the Hubble Deep Field North, a 10-day-long time exposure of a little spot of sky in Ursa Major. Galaxies are recorded to nearly 30th magnitude in the image, made in December 1995. Since then the Hubble Space Telescope has taken two similarly deep exposures in the sky's southern hemisphere. The three have provided raw material for countless research projects.

Seven years after the first Hubble Deep Field (HDF) revealed the most distant galaxies ever seen, a team of astronomers has done a new analysis of those galaxies that could rewrite the history of the early universe. According to Kenneth M. Lanzetta (SUNY Stony Brook) and his colleagues, the rate of star formation peaked in just the first few hundred million years after the Big Bang and has been declining ever since. Older analyses had concluded that the rate of star formation peaked much later.

"Previous measurements have missed the dominant fraction of the light from the earliest galaxies," Lanzetta explained at a press conference Tuesday. All prior studies of the most ancient, highest-redshift galaxies in the Hubble Deep Fields saw only "the tip of the iceberg," the galaxies' very brightest portions. Most of a galaxy's starlight, however, comes from its intermediate-brightness regions, which are too faint to show at all in the HDF views of the farthest objects. As a result, said Lanzetta, "Even the deepest, most sensitive measurements have missed most of the light of the early universe." In other words, many more stars were shining back then than anyone realized.

The faintest galaxies in the HDF images are too dim for their spectra to be measured with any existing telescope. So instead, the SUNY team did multicolor photometry of 5,000 of the faintest galaxies through 9 to 12 broad-band color filters (using both Hubble images and large ground-based telescopes) to produce a sort of low-resolution spectrogram of each. This method proved good enough for redshift purposes after the astronomers calibrated it against the 150 brightest galaxies in the fields, for which actual spectra are available.

The new analysis, the team said, indicates that starbirth in the universe proceeded like a fireworks show in reverse. "The grand finale came first," summed up Bruce Margon (Space Telescope Science Institute). The rate of starbirth in the first few hundred million years, said Lanzetta, was 10 times what it is in each equivalent section of space today. If so, that initial dazzling display should become clearly visible with the launch later this decade of the Next Generation Space Telescope, Hubble's successor.

The result will appear in a future issue of the Astrophysical Journal.