An Emerald-Cut Diamond in the Rough

Think “galaxy” — what do you see? Maybe a grand-design spiral comes to mind, or a fuzzy, football-shaped elliptical, or a patchy, irregular dwarf galaxy like the Large and Small Magellanic Clouds.

I bet there’s one thing you don’t think of, though: rectangles. 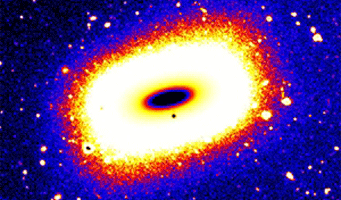 A false-color image shows the "exceedingly rare" rectangular galaxy. The contrast at the center of the image has been modified to show the embedded blue disk likely bursting with hot, young stars.

Researchers have found an “exceedingly rare” example called LEDA 074886, nicknamed the “Emerald-cut Galaxy” for its odd, rectangular shape. “It’s one of those things that just makes you smile because it shouldn’t exist, or rather, you don’t expect it to exist,” says Alister Graham (Swinburne University of Technology, Australia), lead author of the study.

The peculiar dwarf galaxy was hard to find. It was one of more than 250 galaxies floating in the rich cluster surrounding NGC 1407, a giant elliptical galaxy 70 million light-years away. It’s small — only about 11,000 light-years across, compared to Milky Way’s 100,000 light-year-wide disk — and faint, with 1,000 times less mass in stars than the Milky Way.

Dwarf galaxies are the most common galaxies in the universe, far outnumbering giant spirals like the Milky Way. But rectangular galaxies are quite rare — the authors of the study pored through the literature to come up with only seven similar examples. Even compared to this select group, LEDA 074886 is unique in its appearance: inside its rectangle of stars resides a blue disk full of star-forming gas clouds.

How did this happen? The authors suggest one possibility. If two spiral dwarf galaxies merge in an edge-on collision, the stars of both galaxies might swing outward on slingshot trajectories. When we view the resulting shape from the side, we would see a boxy-looking rectangle. Meanwhile, the gas reservoir of both galaxies would have collided and fallen to the center, forming an inner disk soon blooming with newborn stars.

In other words, making LEDA 074886 requires two different types of galaxy mergers, one in which stars form and one in which they don’t. That makes it an interesting example for researchers studying galaxy evolution.

Is there any way there could be two "nuclei", black holes perhaps which causes the rectangular/ellipse shape?