An ancient spiral galaxy offers another tantalizing clue to how nature might create these grand designs. 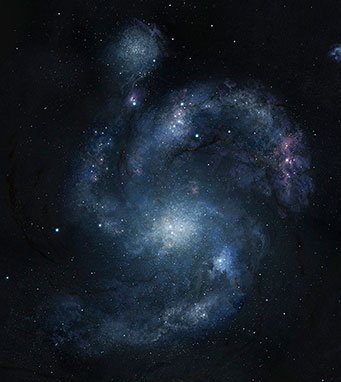 An artist's illustration of the grand design spiral BX442 that lives in a universe only 3 billions years old. The close passage of the dwarf companion galaxy to the upper left may have triggered the formation of spiral arms.

Take a look through your telescope at our local universe, and you’ll find lots of beautiful, grand-design spirals. Messier objects M51, M81, and M101 all come to mind — perhaps M101 especially because of the supernova that exploded there last year. But if your telescope reached a bit further than our cosmic backyard, you would find that these elegant spiral disks gradually give way to clumpy, irregularly shaped galaxies. So when astronomers found a grand-design spiral gleaming from the universe when it was only 3 billion years old, they were pleasantly shocked.

Despite its great distance, the spiral design of the galaxy Q2343-BX442 is clear in observations by the Hubble Space Telescope and the Keck II Telescope in Hawaii. Measurements made with Keck’s OSIRIS spectrograph confirm that the arms are indeed rotating around a central bulge, so the apparent spiral shape doesn’t result from a chance alignment of two disk-shaped galaxies, the study’s authors conclude in the July 19th Nature.

By all appearances, BX442 is a pretty normal galaxy. With a diameter of 52,000 light-years, the spiral is roughly half the size of the Milky Way. The arms churn out stars at a rate 30 times higher than our galaxy’s neighbors, but these high rates are comparable to other star-forming clumps in the ancient universe. 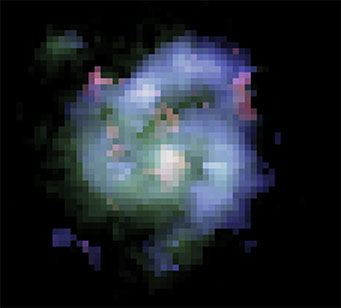 The only thing that’s not normal about BX442 is the fact that it exists. The galaxy is the only one with a regular spiral shape out of 306 galaxies the team examined with Hubble, all of which lie a similar distance away. Astronomers think spiral patterns are rare in the early universe because newly formed galaxies tend to be turbulent and therefore unfriendly to organized structure. Many of a galaxy’s stars will circle the nucleus in well-behaved elliptical orbits, but other stars will follow random paths that don’t match the galaxy’s overall rotation. As a result, the galaxy becomes “puffy,” making it difficult to shepherd the stars and gas into a spiral pattern.

But BX442 is puffy, the Keck spectroscopic observations reveal. So how did the fluffy galaxy arrange its gas and stars into such sweeping spiral arms? Based on computer simulations, the authors suggest that the gravitational pull of a passing dwarf galaxy (seen to the upper left of BX442 in the image) may have disrupted the galaxy in just the right way to form the spiral pattern. The catch is that the spirality is therefore short-lived, lasting less than 100 million years in the simulation, which might explain why spirals are so hard to find in the early universe.

A galaxy’s disk must be relatively stable to start with if you want to make a spiral, says James Bullock (University of California, Irvine), an expert in galaxy evolution not involved in the study. Last year, Bullock and his colleagues suggested that the Milky Way’s spiral structure might result from its interaction with the Sagittarius dwarf galaxy. Stable galaxies that interact with a neighbor in just the right way to form spiral arms are exceptional in the early universe, he says. “Law and his colleagues seem to have found one of these rare gems!”

This report presented an important finding. Spiral galaxy arms are short-lived compared to the big bang model age for the universe. Others have been reporting on this topic for sometime. 'Evidence for a Young World' by Russ Humphreys, http://www.icr.org/article/1842/. We have 'New Theory of Evolution for Spiral Galaxy Arms', http://www.sciencedaily.com/releases/2011/04/110420111343.htm and also 'The lifetimes of spiral patterns in disc galaxies', http://adsabs.harvard.edu/abs/2011MNRAS.410.1637S. Finding this spiral galaxy should not be a surprise. Perhaps all spiral galaxies reflect a very young universe vs. 14E+9 years old big bang model.

Sky & Telescope in 1998 published a timeline of the big bang. We have the Copernican time principle on page 38 which is the Copernican principle. 'The Future of the Universe' by Adams, F. C., Gregory, L., Sky & Telescope 96(2):32-39, 1998. After reading this week report on spiral arm lifetime (and others in the past) I point out this observation concerning the Copernican principle. Basic idea here is that we don't live in a special place in the universe and we don't live in a special time. However the observations of spiral galaxies and that these objects are short-lived spiral arms indicates we do live in a special place and time to observe the structure of spiral galaxies today. Perhaps this is part of design and purpose according to Genesis 1:1.

Sigh. It doesn't take much to bring out the religious zealots, does it, even in a scientifically oriented magazine line Sky&Tel.

Since when do "short lived" spiral arms somehow prove that the Universe is only 6015 years, 9 months, and a day or so old? All that science says is that a spiral arm is not a permanent feature -- it comes and goes, according to gravitational dynamics and the motions of stars and gas. You can have a spiral galaxy over billions of years (until destroyed by mergers), but a particular spiral arm may not even last for a full revolution around the galaxy. All we have seen since the invention of the telescope isn't much more than a snapshot of the state of galaxies.

Go back to chattering in the treetops. YOU haven't evolved a bit.

Phil et al. The view that spiral galaxy arms recycle and reform multiple times in a galaxy over billions of years maybe called *science*. However this *science* is not the scientific method. The scientific method is based upon repeated observation, testing and the ability to falsify a claim. One cannot falsify the claim that various spiral galaxies we see, their arms died and were reborn multiple times over billions of years so today we see the spiral arms because of chance and cosmic evolution. I would classify such a concept an origins belief rooted in circular reasoning using big bang assumptions vs. results obtained by the scientific method.

Phil, not all religious people have such a literal take on the Genesis creation account. Rod, you point out that man has only a short observation history for these billions of spiral galaxies under discussion, but our brief observational period really spans an enormous period of time since as we look deeper and deeper in space we are looking further and further back in time as well. Due to the shear abundance of the spiral galactic configuration, I would argue that the arms of these spirals may not be transitory at all. The arms in the disk of a spiral are locations of increased stellar density and brightness due to star formation and therefore younger average stellar age. IMO, as each arm rotates around the galactic center individual stars drift mostly into these locations of increased density and therefore increased gravitational attraction. If the spiral configuration is temporary where are all the galaxies with wimpy looking arms?

Bruce, you ask a good question. The main reason spiral galaxy arms are short-lived is differential rotation speeds of stars and gas observed from the core to outer regions. Over hundreds of millions of years, spiral galaxy arms wrap up tightly so we should see amorphous blobs instead of spiral galaxies within 500E+6 LY distance from earth today. In the big bang model, astronomers need regeneration mechanisms with repeated rebirth of the arms to solve the problem. For many creationists, spiral arms are an indication of abrupt and rapid star birth in the beginning.

Rod et al, I know about the differential rotation issue arising from Kepler’s law, but do to the inferred (and necessary) presence of dark matter the actual difference is much less than what was originally expected, therefore the arm wrap up you mentioned is slowed considerably. Stars and interstellar clouds aren’t just attracted to the core; any concentration of mass in the vicinity will also influence their orbits. Spiral galactic arms are often referred to as density waves, and I think the wave analogy is very appropriate. Think of the motions of water molecules near the surface of a deep body of water. Obviously there are more water molecules in the waves as opposed to the troughs, but the individual molecules move in and out of wave peak and trough continually. In like manner stars move in and out of galactic arms, but the density “wave” is persistent, thereby helping to explain the current abundance of spiral galaxies. Also, the almost complete absence of spiral structure observed in the early universe reported in Dr. Young’s article contradicts your last sentence.

Bruce, my other posts cited specific sources which contradict the density wave theory you advocate. The GALEX UV images of spiral galaxies discloses much evidence of young OB stars that have not rotated over billions of years in spiral arms. The UV images of spiral arms like M31 supports the arms are short-lived because of differential rotation speeds. This is known as the "the winding-up dilemma" in spiral galaxies. The dilemma has been known for 50 years or more now and is not solved.

To Phil, Rod and Monica, thanks ya’ll, for together you have led me to a better understanding of how this magnificent universe works. Phil, without your comment to Rod I would not have engaged him in this discussion. Rod, before bed last night as you encouraged I looked up some of the references you sighted in your first post of this thread. I went to sleep thinking, how amusingly ironic, here a religious person (Rod) is trying to get another religious person (me) to change his thinking (that spiral galactic structure is persistent) based on a few very recent theoretical simulations and observations of rotation in only a few local group spirals. Showing that I am willing to amend my thinking when evidence warrants however, I return to my earlier water wave analogy: Consider a lake in the mountains. Occasionally a boulder or a landslide plunges off a mountainside into the lake, thereby perturbing its surface. Waves are produced, but they spread out and damp out over time; they are not persistent. So to cause the spiral configuration to be so common on the galactic scale what’s needed is periodic perturbation events, and that’s exactly what’s provided by small satellite galaxies. Therefore I now see the universe more as it actually is, more dynamic and ever-changing. These are the new thoughts I had upon awaking today. My scientific side said eureka! My religious side joyfully said hallelujah! (Psalms 150:1,2) 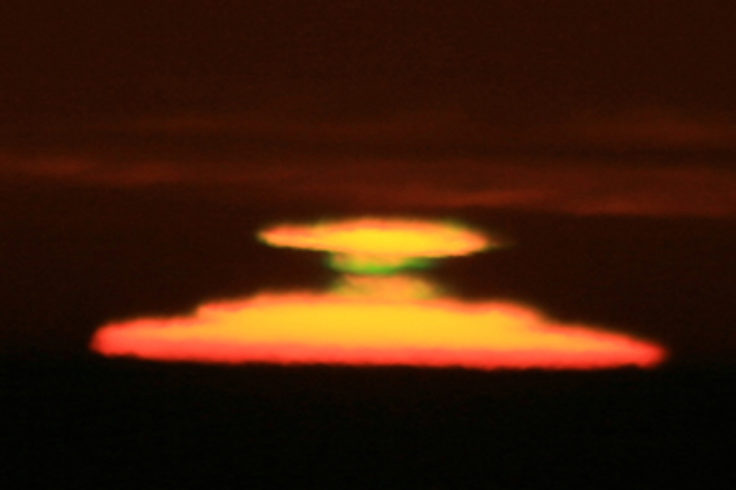 We Don’t Really Know When the Sun Rises