Every year awards are given to high-achieving members of our community, so let's take a moment to applaud them and their stellar contributions to amateur astronomy. 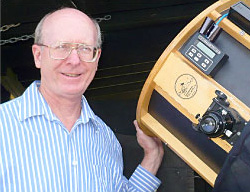 Veteran comet-hunter Don Machholz poses with the 18-inch telescope that netted him his 11th find, C/2010 F4, and a share in the 2010 Edgar Wilson Award.

Most recently (August 6th), the International Astronomical Union's Central Bureau for Astronomical Telegrams (CBAT) announced that four amateurs share this year's Edgar Wilson Award. Established in 1998 and administered by the Smithsonian Astrophysical Observatory, this award goes to those dedicated observers lucky enough to spot a comet using amateur-grade equipment. Here's the list of winners, who will split the prize money equally:

Harvard-Smithsonian astronomer Daniel Green, who's coordinated the Wilson award for many years, notes that all but one of the last 13 amateur comet discoveries utilized digital imaging. Machholz's C/2010 F4 was the first found with eyes alone since David Levy spotted P/2006 T1. "There were no visual discoveries in 2003, 2005, or 2007-09," Green notes. "But during 2000-02, there were 11 visual discoveries of seven comets — compared to only two using CCDs in that same 3-year span! Changing times!"

CBAT's announcement about the Wilson Award comes close on the heels of the Astronomical Society of the Pacific's annual meeting. On August 3rd, at the ASP's annual banquet, Allan Rahill accepted this year's Amateur Achievement Award. At the Canadian Meteorological Center, Rahill and colleague Attila Danko maintain the Clear Sky Clock Chart website that has become an invaluable tool for observers throughout North America.

Also honored by the Society were science writer Marcia Bartusiak, winner of the Klumpke-Roberts Award for her contributions to the public understanding and appreciation of astronomy; and Wayne "Skip" Bird, whose efforts as an ambassador for astronomy in schools earned him the Las Cumbres Amateur Outreach Award. Several others received awards for their work in education and outreach; read about them all in the Society's press release and see their pictures here. 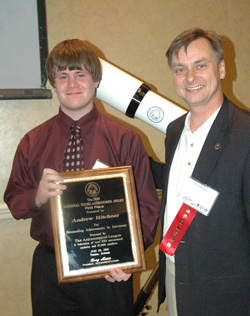 Two months ago I headed to Tucson, where the Astronomical League held it annual convention. The League, and especially incoming president Carroll Iorg, has taken the lead in promoting amateur activity among a new generation of stargazers. To that end, a highlight of this year's gathering was the presentation of the National Young Astronomer Award, which recognizes achievements by top high-schoolers in the U.S., and the Jack Horkheimer Award, given to youngsters whose time and talents have helped the League or one of its 240 member societies.

Competition was especially keen for this year's NYAA, notes Iorg, with more entries than he's seen in many years. The submitted projects were judged by trio of professional astronomers.

The first-place finisher, Andrew Hitchner of Norristown, Pennsylvania, explored the relationship between the temperature of a star and the strength of hydrogen's Balmer absorption lines in the star's spectrum. He recorded stars of various spectral types with an 8-inch Meade LX200 telescope and then analyzed their spectra. Hitchner's results supported, at least in part, his hypothesis that lower temperatures correlate with weaker line strength — though he discovered that superhot O-type stars don't have strong hydrogen lines either.

Hitchner will have a tougher equipment choice for his next observing project: as the top NYAA winner, he received an Explore Scientific ED 127 refractor on a Twilight II mount from sponsor Scott Roberts.

Taking second place this year is Tongji "Youyou" Li, who lives in Hershey, Pennsylvania. To assess the threat posed by near-Earth asteroids, she wrote a computer program to determine their orbits and the risk they pose. Third place goes to Erika Tinley of Tucson, Arizona, whose project was entitled "The Geometry of Active Galactic Nuclei as Evidenced by Their Emission Line Spectra."

I can't do justice here to the amazing work these three students and their fellow entrants, or to the other prizewinners noted below. But be sure to check out Iorg's summaries in a forthcoming issue of The Reflector. 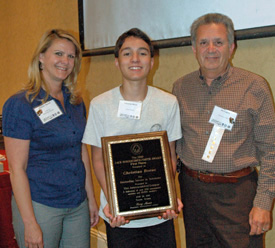 The Horkheimer award, generously sponsored by one-of-a-kind stargazer Jack Horkheimer, is actually a series of recognitions for youth service to astronomy. This year's recipients are:

Speaking of science fairs, back in May the ASP presented high-school seniors Andrei Nagornyi (Staten Island, New York) and Evan Fletcher (Galesburg, Michigan) with its Priscilla and Bart Bok Awards at the Intel International Science and Engineering Fair in San Jose, California. Read about these students' incredible research projects here.

Finally, I'd be remiss if I didn't acknowledge an award presented last January to Robert Stephens. The Chambliss Amateur Achievement Award is perhaps the highest honor a backyard stargazer can attain — because it's bestowed by the American Astronomical Society at its annual winter meeting. Stephens, a certified public accountant in Rancho Cucamonga, California, is best known for his involvement in the annual RTMC Astronomy Expo and the Society for Astronomical Sciences. But did you know that this avid eclipse-chaser has published more than 100 research articles? His specialty is asteroid photometry.

OK, I think that's it — did I miss anyone? Congrats to all this year's winners! You make us proud to be called "amateur astronomers."

I bet Bob Naeye is tickled pink that a student from his hometown would win such a prestigious award. 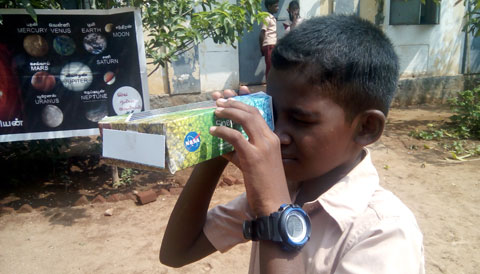