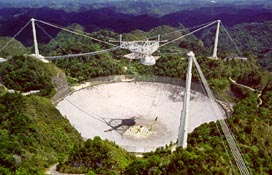 The 305-meter (1,000-foot) radio telescope near Arecibo, Puerto Rico, has been used for radar probing of solar-system objects since the early 1960s. The facility underwent a $27 million upgrade in the mid-1990s.

Today the space agency did an equally abrupt about face,
opting to provide $400,000 through the end of fiscal 2002. "We made
a mistake," said Edward J. Weiler, who directs NASA's space-science
efforts, "and we've fixed it."

The central issue revolves around the fact that the Arecibo
program has become part of NASA's effort to find and catalog potentially
hazardous near-Earth objects, or NEOs. (Congress has mandated that NASA
track down 90 percent of all 1-km-wide asteroids in Earth-crossing orbits
by 2008.) But the Arecibo facility doesn't find asteroids —
astronomers use it to make follow-up observations of the ones spotted
first by telescopic surveys. Morgan, who manages NASA's NEO program,
wants to maximize the discovery rate, and to do so more of his $3.55
million budget must go to the four observing teams that are actively
searching for NEOs.

The cancellation decision created a shock wave of disbelief
among asteroid researchers and triggered several calls for reconsideration
from astronomical organizations. Arecibo has been at the forefront of
radar studies
since 1960, and astronomers routinely direct its powerful megawatt transmitter
toward the Moon, Venus, Mercury, and Jupiter's Galilean satellites.
NASA also conducts some radar work using its 70-meter-wide
tracking antenna near Goldstone, California. But Arecibo's dish
boasts a more powerful transmitter and is at least 10 time better at
picking up faint radar echoes.

Researchers were thus fearful of losing their single best
ground-based tool for studying asteroidal surfaces and for refining
their orbits. These characteristics are of more than purely scientific
interest: should astronomers discover an asteroid on a collision course
with Earth, knowing its makeup and exact trajectory would be crucial
to mounting a defense strategy. Arecibo is the "premier astronomical
research facility in the world" for this work, notes theorist Eric Asphaug
(University of California, Santa Cruz), because it targets a wide spectrum
of asteroids and comets, whereas spacecraft have visited few of these
bodies.

Although the Arecibo program has secure (if diminished)
fiscal footing for 2002, it still faces funding challenges in the years
ahead. For one thing, Weiler has demanded that future research proposals
utilizing the Arecibo radar system undergo peer review. Ultimately,
he would like to see responsibility for Campbell's group transferred
to the National Science Foundation, which already provides $9.5 million
each year for Arecibo's general operation.