A large Earth-approaching asteroid, now sailing near Earth, has a lumpy shape and is accompanied by a pair of tiny moonlets.

Backyard stargazers are enjoying the chance to watch the big near-Earth asteroid 3122 Florence sailing past Earth. Yesterday it came no closer than 7.0 million km (4.4 million miles or 0.047 astronomical unit), but even so it got as bright as magnitude 8.7 and will remain 10th magnitude or brighter through the evening of September 5th.

The asteroid’s slow, leisurely encounter provided a great opportunity for planetary astronomers to probe the asteroid with the big radar-equipped dishes at NASA’s Goldstone tracking station in California and Arecibo Observatory in Puerto Rico.

The Goldstone runs, which began August 28th, have already paid big dividends. A team of scientists at NASA’s Center for Near Earth Object Studies (CNEOS) announced late on September 1st that Florence is orbited by a pair of small moons. “The sizes of the two moons are not yet well known, but they are probably between 100 and 300 meters (300-1000 feet) across,” the team notes. “The times required for each moon to revolve around Florence are also not yet known precisely but appear to be roughly 8 hours for the inner moon and 22 to 27 hours for the outer moon.”

CNEOS researchers Lance Benner, Shantanu Naidu, Marina Brozović, and Paul Chodas (Jet Propulsion Laboratory) suspected they’d find one or more moons. Prior ground-based observations had shown that Florence spins quickly, once every 2.4 hours, and such a rapid rotation usually means there’s a companion. But triples remain rare among the 16,000+ near-Earth known asteroids — Florence is only the third to date, and all three were found through radar observations.

“When I posted the echo power spectrum and collage of images [on August 29th], I didn’t think there was any sign of a companion,” Benner told Sky & Telescope. "But when we processed the data at higher resolution late in the afternoon, the characteristic signature of a satellite appeared in the continuous-wave data, and then we saw the satellite in some 1-microsecond imaging data. We saw it again early [on August 30th]."

The Goldstone data also confirm that Florence itself is rather spherical and about 4½ km (3 miles) across, as had been assumed from prior studies with ground-based telescopes and the NEOWISE spacecraft. The radar images reveal a ridge along its equator, at least one large crater, two large flat regions, and numerous other small-scale topographic features. If further analysis shows that the moons orbit near Florence’s equatorial plane, then that ridge might be a pile of accumulated debris that fell back onto surface after the impact event that caused the moons to form.

More discoveries likely will come in the days ahead. Arecibo’s radar soundings continue until September 5th and Goldstone’s for another 2½ weeks. The resulting radar echoes will achieve incredible signal-to-noise ratios — about 5,000 at Goldstone and better than 50,000 at Arecibo.

Benner also hopes to conduct bistatic radar observations, which involve transmitting from one dish and receiving at another. The initial plan was to  tie in the 100-meter-wide Green Bank radio dish in West Virginia, which could resolve even more details on the satellites, but that didn't materialize. Instead, says Benner, "We are planning bistatic observations on Sep. 4 between Goldstone and the Badary 32-m antenna in Russia," which lies near the border with Mongolia and is part of the Quasar VLBI network.

Beautiful, Nice Work;
Only one thing is missing to know, The Distance Between Florence & Her Moons ...
& So, When They Will Be At Their Closest to Earth, How Far Will The Outer Moon BE From Us, as they will pass at a third the distance between our Moon & the Earth?
& Will That Closeness be Sufficient For The EARTH to Capture that OUTER Moon? or even Both?? ...
OR Even MORE ... ...

Alfred... the moons probably orbit no more than 100 km from the asteroid, so they (and their parent) won't come anywhere near the Earth-Moon system.

Is anything known about the material composition of Florence? Do the radar observers expect to resolve orbital data sufficiently to calculate an accurate mass figure for Florence? 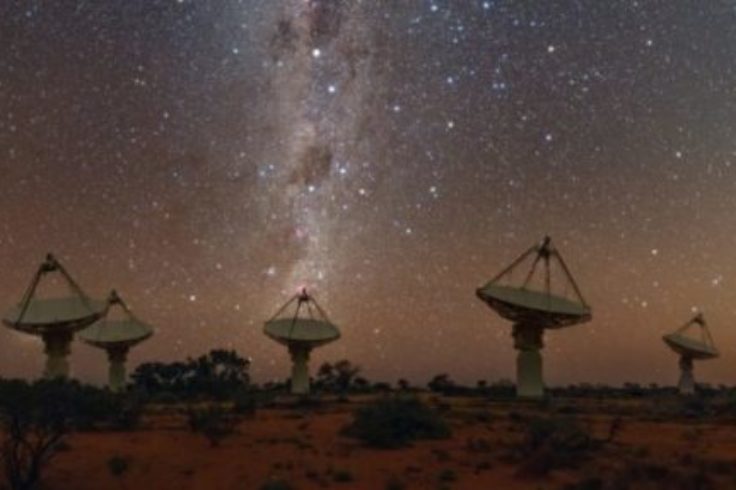 Faint Repetitions of an Extragalactic Burst