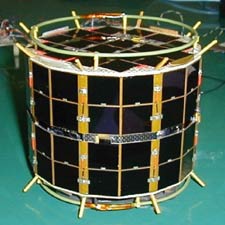 The grapefruit-size 'lander,' Minerva, failed to reach the surface of asteroid Itokawa after being deployed on November 12th.

On November 12th the Hayabusa spacecraft guided itself to within 55 meters of the surface of 25143 Itokawa, then backed away, completing a dress rehearsal for its upcoming sampling of the asteroid. During the test the spacecraft released Minerva, its small robotic lander, which was supposed to drop gently onto the asteroid and begin relaying images and temperature data to the main craft.

However, Minerva never reached the surface. The command from mission controllers at the Japan Aerospace Exploration Agency to deploy Minerva apparently arrived while Hayabusa was drifting away from the asteroid, which has an escape velocity of only about 20 centimeters per second. As a result, explains JAXA scientist Junichiro Kawaguchi, Minerva floated off into space. The spacecraft did manage to capture an image of the lander as it drifted away and has established radio contact with it, but Minerva's fate remains unclear. 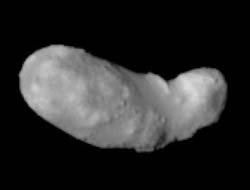 Asteroid 25143 Itokawa, as seen on September 10, 2005, two days before the arrival of Japan's Hayabusa spacecraft. The very irregular and elongated shape hints that this 600-meter-long body is a fragment from the breakup of a much larger asteroid.

Hayabusa uses autonomous navigation to maneuver and position itself around Itokawa, and on November 4th a glitch in this system cut short the dress rehearsal's first attempt. However, despite the loss of Minerva, mission scientists still expect to acquire two small samples of the dust-covered asteroid on November 19th and 25th. Soon thereafter Hayabusa will fire its ion-fueled engine and begin the long trek back to Earth.

Roughly the size of a large grapefruit and weighing only 590 grams, Minerva carries three tiny color cameras and six thermometers. According to team member Tetsuo Yoshimitsu, the lander was designed to move from spot to spot across the asteroid by 15-meter-long hops.

Minerva became a last-minute replacement for a hopping four-wheeled rover supplied by NASA. Agency officials abruptly cancelled the effort in November 2002, when it became clear that engineers were having trouble getting the rover's mass down to 1 kilogram and would exceed the project's $21 million budget.