Deep Space Industries, Inc, announced plans to send a fleet of asteroid-prospecting to target asteroids in 2015 — and that’s just the first step in their ambitious proposal.

When Planetary Resources announced their plans to mine asteroids last April, there were plenty of naysayers — just take a gander at the commenters responding to our article at the time! But following the announcement, billionaire investors hopped on board. And now another entrepreneurial company is heating up the competition.

Deep Space Industries, Inc, announced its asteroid-prospecting plans yesterday at a press conference in Santa Monica's Museum of Flying. Most of the company's long list of founders were present, including Chairman of the Board Rick Tumlinson and CEO David Gump, veterans of space commercialization. Though the press conference was short on details, such as what investors they have lined up and what propulsion system they'll use, the company did reveal an ambitious plan for asteroid mining. 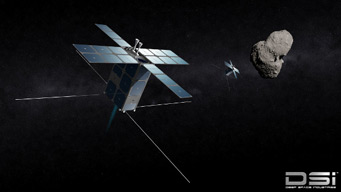 The first step in mining asteroids is to learn more about them. DSI aims to launch a fleet of FireFlies in 2015 to prospect promising near-Earth asteroids, determining properties such as their composition and spin rate.

Deep Space’s grand plan comes in three parts. The first stage is the FireFly fleet (a name sure to warm the heart of any Joss Whedon fan), three spacecraft scheduled for launch in 2015. These 25-kg (55-lb), laptop-sized probes will carry imaging equipment to examine the composition, spin rate, and other properties of promising near-Earth asteroids. To take advantage of their small size, the FireFlies will utilize technology developed for CubeSats, mini-satellites (no more than 1.3 kg) designed to piggyback on the launch of commercial satellites.

The FireFlies' scheduled launch date has garnered some skepticism. “CubeSats are a good idea [but] I think 2015 is unrealistic,” says S&T contributing editor Jonathan McDowell (Harvard-Smithsonian Center for Astrophysics), who tracks rocket launches. “Maybe 2017 or 2018 for a first launch.” 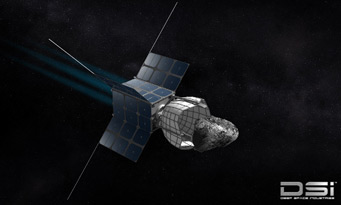 The DragonFly is scheduled to follow the FireFly in 2016, setting out on longer, roundtrip expeditions to bring back 60-150 pounds of asteroid for further study.

The FireFlies will be designed for a quick one-way trip, taking maybe 6 months to reach their target asteroid. Their successor, the DragonFly, will make roundtrips, taking 2-4 years to return samples from near-Earth asteroids. Deep Space’s press release claims these 70-lb spacecraft will be able to carry home 60 to 150 lbs worth of asteroid. That’s quite a hefty sample, compared to the roughly 2 kg that OSIRIS-Rex, NASA’s asteroid sample-return mission, aims to collect.

The aggressive schedule puts the first DragonFly launch in 2016. (That success might herald the company’s IPO, suggests David Gump, the company’s CEO.) But returning hundreds of pounds of asteroid is only the beginning. The DragonFly will be succeeded by the Harvestor, a true asteroid-mining spacecraft that will require a major launch vehicle to make it into space and will return thousands of tons of space-rock per year, starting as early as 2020. 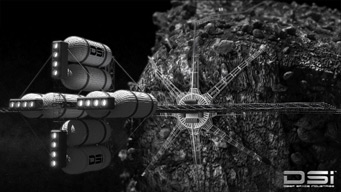 The Harvestor will herald the age of asteroid-mining. These spacecraft will return thousands of tons per year for space-based manufacturing and refueling of aging satellites.

A key point of Deep Space’s master plan is that the material they mine won’t go back to Earth. At most, it’ll go to low-Earth orbit, where volatiles will be used to refuel aging communication satellites, and rare metals can be used in space-based manufacturing. Material is expensive to launch into space (about $10,000 per kg), so a typical asteroid worth $4,000 on Earth’s surface would be worth $1 million in orbit, estimates Mark Sonter, a member of Deep Space’s board of directors.

The ideas Deep Space Industries presents aren’t new. The idea of asteroid mining has been around at least since the 1940s, thanks to science fiction, and fiction began merging into fact as early as this 1979 NASA study. NASA has been doing its own share of asteroid exploration lately with the Dawn mission, and the upcoming OSIRIS-REx. And then there’s the ongoing watch for potentially hazardous near-Earth objects. The privately funded B612 Foundation will launch the Sentinel spacecraft in 2017 or 2018, with the aim of mapping out the inner solar system.

But the real competition is Planetary Resources. As hal9000 said in Spacevidcast’s live chat during the press conference, “May they be the Coke and Pepsi of asteroid mining.” The two companies are plotting similar trajectories — find asteroids worth going to, rendezvous, and eventually, send in the mining robots — albeit with different technologies. So far, Planetary Resources has some notable advantages: a several-month lead, several billionaire investors, and a working prototype. (Their tech update was uploaded to YouTube two days before DSI’s big announcement.)