Asteroids, Planets, and Moons, Oh My

A fun collection of astro announcements has come out of this week’s American Geophysical Union meeting in San Francisco (the most noteworthy being the planet found smack-dab in a Sun-like star’s habitable zone). The AGU mostly features terrestrial research on topics such as lightning and the ocean, but there’s also a fair smattering of planetary science stuff. Here’s a sample of things floating through the meeting’s halls: 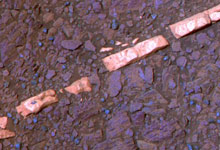 A false-color view of the mineral vein called "Homestake," taken by the panoramic camera onboard NASA's Mars rover Opportunity.

Gypsum formed in water on Mars
Yes, it’s water on Mars — again. A perennial topic that almost always manages to snatch headlines, water on the Red Planet has another proof going for it in a mineral deposit found by NASA’s rover Opportunity. The mineral, called gypsum, has been spotted before, spread across northern dunes, but this vein looks to have formed in place, possibly through a combination of water and volcanic rock. Read the Jet Propulsion Laboratory’s press release. You can also read the meeting abstracts in the scientific program: just type P22A in the search field (it’ll be the second hit for Tuesday, December 6th). Ignore the request to login, you can browse the program without doing so.

Sun “sandblasts” the Moon
This one’s just fun to think about. The solar wind pours speedy, ionized particles into space that dance through Earth’s magnetic field but also slam into unprotected bodies — like the Moon — and eject atoms from the surface in a process called “sputtering.” On the Moon, sputtering actually contributes quite a bit to the wispy lunar atmosphere (technically, “exosphere”: it’s too thin to be a real atmosphere). Scientists using computer simulations to track different types of solar wind found that powerful solar eruptions called coronal mass ejections can sputter 50 times as much material from the lunar surface as a regular solar wind can. CMEs’ strength comes from their higher concentration of doubly ionized helium, which is a heavier particle than the protons that make up almost all of the normal solar wind. Search P13D in the scientific program for the team’s description; there’s also a NASA press release. 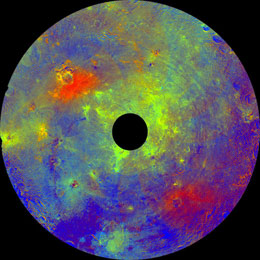 A rainbow-colored image of the asteroid Vesta, based on data from the framing camera aboard NASA's Dawn mission. Dawn will stay at Vesta until 2012, then head for the largest member of the asteroid belt, Ceres.

New Dawn images of Vesta
NASA’s Dawn mission to the asteroid Vesta has already turned up strange scars and a gigantic mountain on the body’s surface. As part of the ongoing discovery, mission scientists released on December 5th picturesque false-color images of Vesta’s southern hemisphere. The colors code for compositional differences. In the shot shown here, green may mark the mineral pyroxene, which forms in igneous and metamorphic rocks and is a prime ingredient in Earth’s upper mantle. The big green splat in the middle (including the cutout) is the Rheasilvia formation, which includes a 290-mile-wide impact basin called (you guessed it) Rheasilvia.

Evidence for an iron core inside Vesta and a varied composition has made some question the validity of the mere “asteroid” designation. The body shows signs of differentiation — internal separation into core, mantle, and crust — like that in larger planets. Personally, I think, hey, Vesta naturally lives in the asteroid belt, it looks like an asteroid — it’s an asteroid. It’s kind of like Ceres being a dwarf planet: it’s still an asteroid, too. (Isn’t it?) Either way, scientists hope this “protoplanet” will shed some light on what was going on in the early Solar System.

You can watch a short simulated video flyby of a Vestan hill on NASA’s website.

Magnetic Mercury
Messenger scientists had already reported that Mercury appears to have a weak global magnetic field, despite expectations. Recent observations have confirmed a previous veto against that field arising because of large-scale thickness variations in the parts of the planet’s crust capable of carrying a magnetic signature (from whatever source). The vote still seems to be for an internally-created global field. Search P41A, from Thursday, December 8th.

"It’s kind of like Ceres being a dwarf planet: it’s still an asteroid, too. (Isn’t it?)"

Yep, it is; it's both, so it has dual nationality 🙂

Thank you for the "again". Too many sites keep putting the "water on Mars" headlines up like it's the first time they've found it.

The dwarf planet category is a huge historical mistake. There is no separation other than artificial between asteroids and the so called, but completely ill defined dwarf planet category. For the vast majority of objects that could or could not be categorized as such, we can not measure their diameter, nor their shape. You get this : http://www.gps.caltech.edu/~mbrown/dps.html when you try your hand at saying this is a DP this is an asteroid. We just can't. The simplest way is to scrap that category and have just two, real divisions of objects around the sun : planets (which cleared their orbits) and asteroids, which didn't and never became planets. No double nationality.
Alain

Agreed. Planet categories should be restored to where they were before the 6-day war...

Without an internally generated dynamo to sustain the field over 4.5 billion years, Mercury's magnetic field could be slowly decaying and perhaps evidence that the planet is not billions of years old.