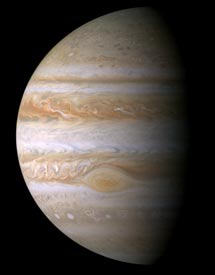 Scientists assembled this Jupiter mosaic from a series of Cassini images taken during the December 2000 flyby. New research suggests that Jupiter formed farther from the Sun and migrated in to its present orbit.

In 1984 astrophysicists Julio A. Fernández and Wing-Huen Ip wrote a seminal paper arguing that the outer planets of the solar system migrated from where they formed to where they are today.

To understand how this could occur, consider gravity assists, such as the Cassini spacecraft's December 30, 2000, flyby of Jupiter. Like a table-tennis ball hitting a rotating ceiling fan and speeding up, Cassini was flung forward an extra 2 kilometers per second by Jupiter's gravitational field. This speeded up the spacecraft's Saturn arrival by several months. But tiny Cassini pulled on mighty Jupiter too, decreasing the planet's orbital momentum by a paltry 1 meter per 6 trillion years. The planet drifted inward by an amount so tiny it would be impossible to measure with a microscope.

That might not sound like much, but in the early days of the solar system, the outer planets experienced trillions of close encounters with small, icy planetesimals. While any one encounter had a negligible effect on a planet, they added up. Fernández and Ip showed that Jupiter must have launched more bodies outward than inward. Some of the outward-bound objects ended up in the Oort Cloud; others were thrown into interstellar space. In response, Jupiter must have migrated inward by perhaps 0.2 astronomical unit (20 percent the average Earth-Sun distance) over the course of about 100,000 years.

Now Fred A. Franklin and a team at the Harvard-Smithsonian Center for Astrophysics have found present-day evidence for a migrating Jupiter long ago. In computer simulations, Franklin and his colleagues discovered that an inwardly migrating Jupiter reproduces the observed orbital characteristics of the 700 known Hilda asteroids. These bodies, which belong to a distinct family with similar orbits and compositions, are trapped in a 3:2 mean-motion resonance with Jupiter — meaning that over the long run they go around the Sun exactly three times every time Jupiter goes around twice. In addition, almost all Hildas have modest orbital eccentricities between 0.1 and 0.25.

White dots represent the positions of roughly 700 known Hilda-family asteroids at a particular moment in time. The yellow ellipses show orbits of three of them. The eccentricities and other characteristics of Hilda asteroids offer evidence that Jupiter drifted sunward during the early days of the solar system.

The team's computer simulations show that an inwardly migrating Jupiter would have shepherded large numbers of asteroids into 3:2 resonant orbits. These objects would have remained stuck in the relationship even as Jupiter spiraled inward. The distribution of Hilda orbits requires a long Jovian migration time scale of at least 100,000 years. Moreover, Jupiter must have migrated inward by at least 0.35 a.u., and more likely 0.45 a.u., for the process to work. Jupiter currently resides at an average distance of 5.2 a.u. (484 million miles, or 779 million kilometers) from the Sun.

This relatively large migration caused low-eccentricity would-be Hildas to be ejected, which explains the virtual absence of any family members with eccentricities less than 0.1. Such a migration also successfully replicates the observed distribution of the Hildas that lie inside the 3:2 resonance itself. The group's work appears in the September 2004 Astronomical Journal.

"Up to now, studies of Jovian migration have relied on computer simulations of what might have happened in the very early days of the solar system," says Franklin. "The current work is different in an important regard: it is observationally based. We are seeking an explanation of a current solar-system phenomenon that has no other known explanation."

Comments dynamicist Renu Malhotra (University of Arizona), "The paper is significant in that it adds to the support for Jupiter's inward migration and provides one of the few quantitative constraints on the magnitude of that migration."