Astro Image in the News: A Martian Potato 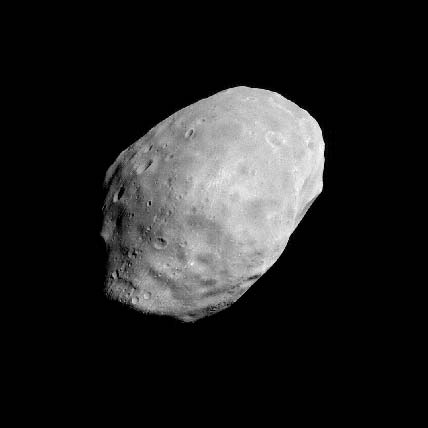 Since 1999 the Mars Global Surveyor spacecraft has been beaming high-resolution views of the red planet back to Earth. So many pictures have arrived in the past few years that it is easy to forget just how powerful the satellite's cameras really are. Thankfully, pictures like this one of Mars's moon Phobos serve as a wake-up call as to the true capability of the MGS instruments.

From a distance of only 9,670 kilometers, MGS resolves details as small as 36 meters on the rocky body. The aligned rows of pits and grooves are a direct result of an ancient impactor — the crater Stickney, not seen in this view, is the most pronounced scar from the collision. The moon itself is small by Earth standards. It is only 27 by 22 by 18 kilometers and is about 0.006 times the size of Earth's Moon. Phobos orbits Mars about once every eight hours, three times per Martian day.