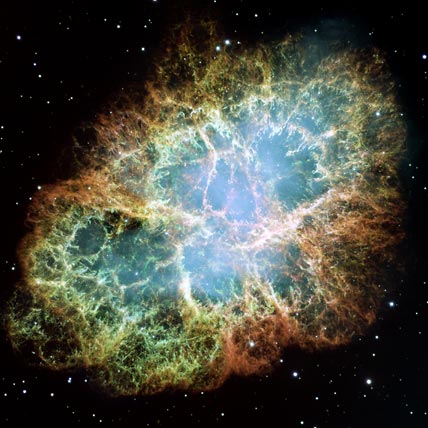 Between October 1999 and December 2000, the Hubble Space Telescope's Wide Field and Planetary Camera 2 imaged the Crab Nebula frame by frame, providing the fodder for this 6-arcminute-wide false-color mosaic, released today. Visit the Space Telescope Science Institute website to download the image at a variety of resolutions.

Professional astronomers got a glimpse of it 11 months ago, when the American Astronomical Society met in San Diego, California. But the rest of the world had to wait until today to view this portrait of the Crab Nebula. And while ground-based telescopes have been delivering stunning images of the Crab for years, much remains unknown about this singular supernova remnant.

Independently discovered by English astronomer John Bevis in 1731 and by French astronomer Charles Messier in 1758, the 8th-magnitude Crab occupies a special piece of celestial real estate in the constellation Taurus. Bevis and Messier didn't know it at the time, but Asian astronomers had seen a "guest star" appear at just that spot seven centuries earlier. Visible in broad daylight for 23 days, the new star took almost two years to fade from the night sky. Astronomers now know that the inconstant starlight came from a supernova — a massive sun whose outer layers were blasted out into interstellar space.

They also know how the Crab's two main components formed shortly afterward. The inner, vaguely S-shaped, light blue glow seen above comes from electrons traveling at near-light speeds in the presence of magnetic fields. Those electrons originate with the Crab Nebula's pulsar — the ultradense, ultramagnetic core of the shattered star, which bathes Earth with radiation 30 times a second as it whirls around its axis. The brownish, richly textured outer zone is part of the dead star's expelled envelope.

Arizona State University astronomer Jeff Hester and his colleagues obtained the Hubble images in order to better understand how the Crab's two components have shaped one another. They also hope to exploit the images' superior resolution to understand how the filaments lining the outer zone are structured. This, says Hester, is a key step in deducing the filaments' chemical compositions. In turn, that will help astronomers understand how exploding stars created many of the universe's chemical elements.