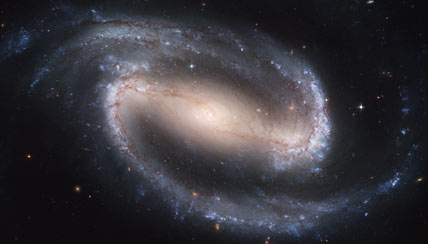 NGC 1300 in Eridanus is one of the finest barred spiral galaxies in the sky. Click for better view, or download the full resolution version.

Half of the spiral galaxies in the present-day universe are barred — and no one knows why. If Patricia Knezek (WIYN consortium) has her way, however, exciting new Hubble Space Telescope images may help astronomers understand what sets these galaxies apart from their pure pinwheel kin.

At this week's meeting of the American Astronomical Society in San Diego, Knezek and Zoltan Levay (Space Telescope Science Institute) unveiled a stunning image of NGC 1300, a large, 10th-magnitude barred spiral some 70 million light-years distant in the constellation Eridanus. The elongated bar's yellowish cast attests to a makeup chiefly of old stars, while pinkish nebulae and clots of bright blue stars along the arms' outer edges indicate recent and ongoing star formation. "We're still learning a lot" about barred spirals, said Knezek. "This image, I think, will help out tremendously because of the level of detail" it shows.