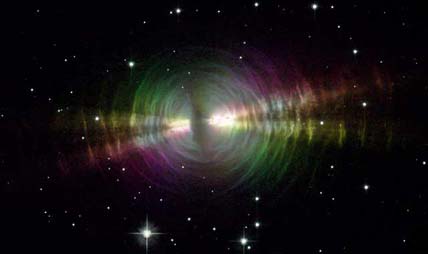 On September 27 and October 16, 2002, the Hubble Space Telescope pointed its Advanced Camera for Surveys at the 3,000-light-year-distant Egg Nebula in the constellation Cygnus. The view is nothing short of stunning — it is as if someone tossed a pebble into a celestial pond.

The scene here is a composite image from three polarizing filters. Light from each filter has been colored red, blue, or green; the colors indicate different orientations of dust particles in the nebula.

The ripples are actually shells of gas and dust sloughed off in convulsions by the obscured, dying central star. Although it is hidden by a donut-shaped disk of thick, dark gas, beams of light from the central star do leak out, which in turn light the "pond."