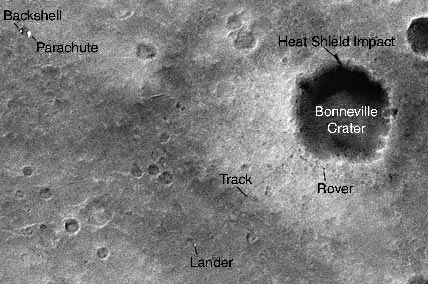 Who says you can't teach an old dog new tricks? The Mars Global Surveyor, now within weeks of conducting its 25,000th mapping orbit around the Red Planet, is taking images with higher resolution than ever before. Using a new technique, MGS operators modify the rotation rate of the spacecraft such that it matches the ground speed under the camera. The results are remarkable.

The scene above shows the world of the Spirit rover on March 30th. What's most amazing is the resolution. At an unbelievable 0.5 meters per pixel, the tracks of the rover are apparent from orbit. So too are the rover itself, as well as its shed accouterments such as the heat shield and parachute.

"Over the past year and a half, the camera and spacecraft teams for Mars Global Surveyor have worked together to develop a technique that allows us to roll the entire spacecraft so that the camera can be scanned in a way that sees details at three times higher resolution than we normally get," wrote Ken Edgett (Malin Space Science Systems) in a prepared statement. "The image motion compensation is tricky and the spacecraft does not always hit its target. However, when it does, the results can be spectacular."

This week also marks the third mission extension for the intrepid orbiter. The craft will remain funded for two more years — through September 2006.