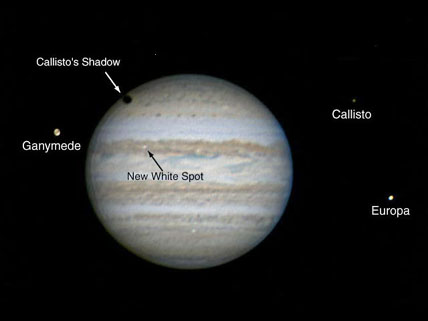 From 8:00 to 8:19 Universal Time on March 28th, for the first and last time this decade, three of Jupiter’s moons cast shadows on the gas giant simultaneously. Jason Hatton of Mill Valley, California, obtained a remarkable series of images showing the moons and their shadows passing over Jupiter for a 5½-hour span at 10-minute intervals using a 9¼-inch Schmidt-Cassegrain telescope and a Philips ToUcam webcam. We have combined his pictures into an animation.

Remarkably, one of the frames (shown above) also turned out to be valuable in its own right; it is the earliest image of a white spot that had just developed in the North Equatorial Belt and has since evolved into a substantial rift. Christopher Go of Cebu City in the Philippines was the first to identify the white spot on one of his own images two days later.

Click on the image above to see the 500-kilobyte animation.
If you watch the second dark spot carefully, you will see that it is not a shadow but the moon Ganymede showing against the bright North Tropical Zone. Io, by contrast, gets swallowed up quickly in the North Equatorial Belt, and is invisible for most of its transit across Jupiter's face. Note also how fast-moving Io catches up with Ganymede and passes it in the last few frames.