A break from the IAU's two-week-long General Assembly provided an opportunity to tour a radio observatory dedicated to solar research — and to find a surprising statue in the city of Ming'antu.

When the world's astronomers only get together every three years, there's a lot to do, and so the IAU General Assemblies always last a full two weeks. During Saturday's "intermission," Naomi and I were driven about 5 hours north of Beijing into Inner Mongolia to visit China's new radioheliograph — a radio telescope array dedicated to solar research.

The arrangements for this trip were made by Yihua Yan, the solar astronomer who'd been our host five years earlier when we looked for a suitable observing site for the 2009 total solar eclipse. Now Yan was supervising a large group of IAU attendees scientists who wanted to visit his optical solar observatory about an hour's drive north of Beijing and to walk on the nearby section of the Great Wall. 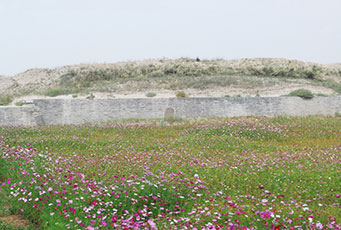 One of Yan's colleagues, Wang Wei, accompanied us on the drive to the radio observatory. Once we broke free of an hour-long traffic jam leaving Beijing, we zoomed ahead at steady 130 km per hour. I could see segments of the Great Wall off to the side at a couple of places, but we didn't stop. Instead, we found a small restaurant for lunch in Zangbei before heading about 20 km north to the ruins of Kubla Khan's famous Xanadu. Not much is left of the 12th-century ruins, but one can see impressive piles of stone and, at a distance around us, a wall.

The radioheliograph's site is a couple of hours farther north. We turned off from the main road, passed a couple of yurts and a collection of mud houses, and proceeded for another 20 km or so on an unpaved road. Passing through another settlement and flocks of sheep, we finally spied the glistening white antennas. 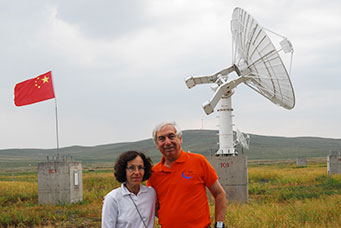 Known as the Ming'antu Observing Station, the antenna complex is intended to detect solar flares and to provide advance warning of the terrestrial arrival of the Sun's powerful coronal mass ejections. For now the complex has 40 dishes, each 4½ meters (nearly 15 feet) across, spread out in a giant three-armed spiral. Within a year, another sixty 2-meter dishes will be added. Eventually all their data will be combined using a type of computer, called a correlator, designed at the National Astronomy Observatory of China. The facility's main building has dormitories for the staff, a large computer area (I signed up for some email), and a larger room for the correlator and other computer equipment.

We took many photos among the dishes. I had previously seen a panoramic overview, which appears in the new edition of my astronomy textbook, and to get a similar view we drove in a truck up a high hill (no road or track existed). Unfortunately, the air was hazy, and the weather soon deteriorated, with a few raindrops coming down.

That night we stayed in the nearby city of Ming'antu. We were met by the woman in charge of the county Congress, and a lavish feast was arranged for our party of 10 astronomers, the host, Naomi, and me. Plate after plate came out on a round turntable, though there was little we wanted to eat. (I'd been looking forward to trying the local lamb that was purportedly plentiful — and there was, indeed, lamb, though not cuts with which I was familiar or which looked desirable.) 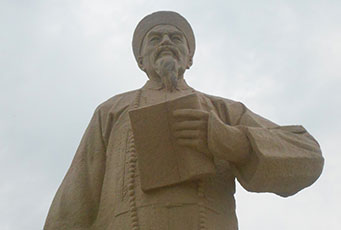 A statue of Ming'antu the astronomer graces a square in Inner Mongolia.

On a morning walk the next day, I spied a giant statue across a huge plaza. "Must be Ghengis Khan," I thought. But instead, I was astounded to learn that it was of an astronomer: Ming'antu, a Mongol who lived from 1692 to 1765. And I was even more astounded to find a 1-m-high reproduction of an IAU Circular (MPC 45750) on the statue's base, announcing that asteroid 28242 Mingantu had been named after him! He was also a mathematician who worked, among other problems, on infinite series, and his namesake asteroid had been discovered at a Chinese observatory.

The building behind the statue is a modern museum, with the first 40% about Ming'antu, a bit in the middle with various artifacts from thousands of years ago, and a final section about science that included a model of the radiotelescope array and photos of the Sun, planets, and other astronomical objects. I wish I had thought to tell our host about the asteroids 5100 Pasachoff and 68109 Naomipasachoff; I'm sure it would have elevated us in her estimation!

In any case, despite wanting to take some more photos of the radioheliograph, the day was again hazy. So we proceeded back to Beijing at high speed.