For any of you who've agonized about dropping $1,000 or more on a new telescope, consider how much professionals worry about where they'll get money for the seriously expensive toys needed to advance the frontiers of astronomy. To pick just one example, the proposed Thirty Meter Telescope has an estimated price tag of nearly $1 billion. Cutting-edge discoveries don't come cheaply.

So where does the money for such megaprojects come from? Among U.S. agencies, NASA provides the lion's share, about $1.1 billion per year. The National Science Foundation chips another $250 million, though right now much of its "new" money is funding construction of the ALMA radio-telescope array in Chile and the Advanced Technology Solar Telescope (ATST) in Hawaii. 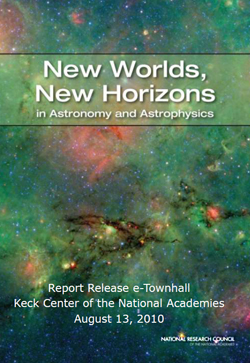 The latest decadal survey of priorities for U.S. astronomy programs was released in August 2010.

OK, then who decides which projects get federal funding? Since the 1960s, that task has fallen to the National Research Council, an arm of the U.S. National Academy of Sciences that periodically assembles a panel of A-list astronomers to assess what projects would get the most bang for the U.S. buck in the coming decade.

It's hard to understate how critical these reviews are the budgeting process. "Nothing is more important to our discipline than the release of the decadal survey recommendations,” says Kevin Marvel, executive officer for the 7,000-member American Astronomical Society. When the one for the 1990s came out, Sky & Telescope devoted nine articles and 54 pages to the conclusions!

Don't worry: I'm not going to write anywhere near that much about Astro2010, the sixth in the NRC's series of astronomy assessments, which debuted last Friday, August 13th. It details a plan of attack for the period 2012-21 — with an eye toward laying the foundation for 2022-31. The massive summary report, written by a 23-member committee chaired by Stanford cosmologist Roger Blandford, has been in the works for nearly two years. All told, 123 experts on nine topical panels sifted through 324 white papers touting various ground- and space-based projects. You can download the full report, New Worlds, New Horizons in Astronomy and Astrophysics, as a free PDF; a printed copy will set you back $39.95 once it's published in final form.

Blandford's charge was to find the best mix of projects to tackle three key scientific objectives: searching for the first stars, galaxies, and black holes; seeking nearby habitable planets; and advancing understanding of the fundamental physics of the universe. As expected, the committee urges strong continued (or increased) support of already-approved programs and basic research. But it also looked at supporting unrealized "honorable mentions" from past decadal assessments.

The winners, if you will, fell into categories with large (exceeding $1 billion), medium ($300 million to $1 billion), and small budgets. Here they are, as ranked in priority by the committee, along with the estimated costs (not all of which may involve U.S. federal funding): 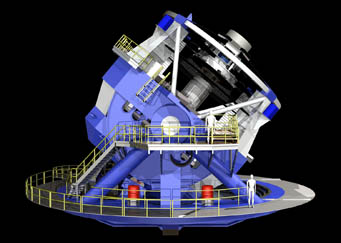 An August 2010 rendering of the Large Synoptic Survey Telescope, which was ranked highest in priority by the NRC's decadal-survey committee. 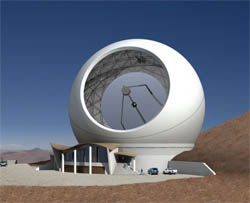 The Cerro Chajnantor Atacama Telescope (formerly the Cornell Caltech Atacama Telescope) will survey the sky at submillimeter wavelengths. Its proposed site is 18,400 feet (5,613 m) in elevation, which would make it the highest observatory on Earth.

Add these up, and it totals some $12 billion over 2012-21 time frame. And that doesn't factor in ongoing big-ticket items like the James Webb Space Telescope. Nor does it includes priorities for planetary science and for solar and space physics, the subjects of separate decadal assessments (here and here) under way right now. Unless NASA and the NSF somehow win the federal-budget lottery, many of these programs won't be funded — nor will scores of other worthwhile research efforts that didn't make the committee's cut. There'll be a few winners and plenty of losers.

Of course, setting such priorities — along with making a strong case for supporting astronomical research generally — is the whole point of the exercise. It's a tough job, but I'm glad somebody's doing it.