New X-ray observations suggest how the Milky Way's supermassive black hole stays so trim when faced with a feast. 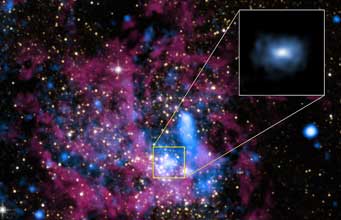 This composite image shows the emission around the Milky Way's supermassive black hole in X-rays (blue) and infrared (purple and yellow). The inset is an X-ray close-up of the black hole's immediate neighborhood (half a light-year wide).

Our galaxy’s black hole has an eating disorder. This is not a surprise. Young, massive stars surrounding the black hole throw off thick winds of particles, and these particles should feed the black hole at a rate of about an Earth’s worth of mass each year. But that influx would make X-ray emission from the beast’s tutu-like accretion disk 100 million times brighter than it actually is.

Astronomers have come up with a few ideas to explain the mystery but haven’t been able to settle on one solution. “It is as though you filled up your car’s gas tank, drove two feet, and ran out of gas,” Jeremy Schnittman (NASA Goddard) writes in a perspective piece in this week’s Science. “Is there a massive leak in the fuel line, or is the mileage really that horrible?” It’s hard to know without hoisting the car and taking a look underneath.

New high-resolution X-ray observations by the Chandra X-ray Observatory now offer insight into why the black hole, nicknamed Sgr A*, is so dim: like a viciously self-denying dieter, it’s throwing over its shoulder almost all of the feast set before it.

Chandra peered deep into the obscured galactic center for an impressive five weeks to find that insight. The X-ray observations reveal emission from hot ionized gas, laid out in a shape similar to the disk of stars around Sgr A*. But one particular spectral line from ionized iron was very weak. This line comes from the hottest material spiraling toward the black hole’s event horizon. A weak line implies that there’s not much gas in that innermost region.

Q. Daniel Wang (University of Cambridge, UK, and University of Massachusetts, Amherst) and colleagues calculate that a measly 1% or less of the initially captured material makes it into the innermost region. The other 99% escapes as an outflow.

“The outflow [is] powered by a tiny fraction of the gas that (altruistically) sacrifices itself so that its fellow protons can escape to freedom,” explains black hole researcher Roger Blandford (Stanford University). This theory has been one of several proposed to explain black holes’ inefficient feeding habits.

Wang explains that the 1% transfers energy to the outflow and, although no one is quite sure of the details, the transfer probably involves magnetic fields. The inner disk is hotter and rotates faster than the outer disk, and this rotation would take the turbulent magnetic fields woven through the gas and wind them up. Wrapped tightly, the fields increase the gas pressure, which in turn pushes an outflow from the disk’s outer regions that would carry with it some of the disk’s energy.

Camille,
You neglected to tell us where the black hole's "shoulder" is.
Does the ejected material enter and become part of the polar jets of the black hole, or does it escape in some other manner never before described?

To my knowledge there's no solid evidence that Sgr A* currently has polar jets, although there are signs that it's produced them in the past. Here the uneaten material is the wind outflow pushed off the outer disk, described in the last two paragraphs. This is a known mechanism in accretion theory, so what's cool here isn't that it's a new idea, but that the observations support the theory. Thanks for asking!

A gravitational system cannot “just collapse” without losing energy and angular momentum anymore than the Earth can suddenly fall into the sun. They’re saying an Earth’s worth of mass comes within grasp of the BH, but it cannot “fall in” without releasing tremendous amounts of energy. They looked for this “fallout” in the form of radiant energy, but it turns out 99% of the energy lost is coupled to other matter. One part contracts, the other expands. One Earth-mass crosses paths with the vortex, but only 0.01 of an Earth actually falls in, the rest gets accelerated outwards to greater than escape velocity, probably by magnetic forces. If this has been going on indefinitely, the 4M solar-mass of Sgr A* implies 400M solar masses went into its making, but 396M got ejected in the process.

It seems that the universe conserves gas (protons, or H nuclei, which is the main fuel of stars) quite well. When stars form they all return some of their gas back to interstellar space via stellar wind. There is a natural limit on how large stars can get (the Eddington limit) produced by stellar winds which grow more and more intense as the size of the star increases. Stars of the Sun’s mass reach a point where they go nova, at which point they expel their outer H rich envelopes. Massive stars that go supernova either expel everything or at the very least most of their material back into space. Now we find that during their normal, far more common quiescent periods the SMBHs at the cores of all large galaxies rip whatever gets near them apart and then they hurl 99% of the material back out into space, instead of letting it pour down the drain, so to speak. Nature, or the vast intelligence behind nature, has set us a marvelous example in the conservation of energy, fuel and raw materials.

Hidden beneath all these bizarre and distracting anthropomorphic metaphors, there is a scientific finding waiting to be understood. A black hole is not a mentally ill sentient being starving itself because of some pathological process. Sometimes analogies can be enlightening. These comparisons to anorexia only confuse and trouble me.

Bubbles, Heated Clouds Point to Active Past for Galactic Center