Finding three galaxies lined up one behind another is less likely than winning two consecutive bets on the same number in roulette. So when astronomer Tommaso Treu (University of California, Santa Barbara) and his colleagues found such a galaxy trio, they knew they'd hit the cosmic jackpot. 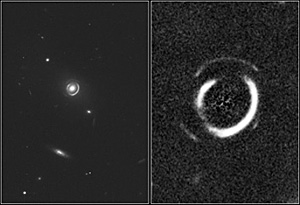 This Hubble image of the obscure galaxy SDSS J0946+1006 in Leo shows it encircled by two concentric rings. These are distorted images of background galaxies whose light was bent as it passed J0946 en route to Earth. In the right-hand panel, which is about 5 arcseconds wide, the foreground galaxy has been subtracted to show the rings better.

At the American Astronomical Society meeting in Austin, Texas, Treu unveiled the first-ever image of a double Einstein ring. It shows an obscure galaxy in Leo, designated SDSS J0946+1006 for its coordinates in the Sloan Digital Sky Survey, encircled by two concentric glowing rings. These aren't part of J0946 itself, but are the strongly distorted images of more distant galaxies strung out behind it like beads on a string.

This is a spectacular example of a phenomenon called gravitational lensing. It's caused by the distortion of space-time by massive objects. While formulating his general theory of relativity, Albert Einstein realized that because of this warping, light won't always travel across the universe in straight lines. For example, if one galaxy lies almost directly behind another as seen from Earth, light from the more distant one will bend around the foreground galaxy and form multiple images — or, in the case of near-perfect alignment, an Einstein ring.

Astronomers have found nearly 50 examples to date, most of them in SDSS images. When Treu's team first looked at the ring around J0946, they thought it was like all the others. But when they shot a close-up with the Hubble Space Telescope, they discovered a broken second ring outside the first. "When I first saw it," recalls Treu, "I said, 'Wow, this is insane!' I could not believe it."

Treu and his colleagues were looking for Einstein rings because they can be used to map the distribution of mass in the universe — especially the unseen dark matter that seems to be many times more plentiful than the ordinary stuff that makes up the visible parts of galaxies. It works this way: from the distances of the galaxies and the shapes and brightnesses of the mirages, you can determine the amount and arrangement of mass in the foreground object (the "lens") needed to produce what you see.

With two rings rather than just one, you can map the mass in two galaxies: the lensing one and the next one out, whose light is stretched to form the inner ring.

In the double-ring system in Leo, the lensing (foreground) galaxy is about 3 billion light-years away, while the lensed (background) objects are 6 and 11 billion light-years distant. According to Treu, this means that J0946 has the mass distribution of a large spiral galaxy surrounded by a giant halo of dark matter — not unlike our own Milky Way. The middle galaxy is a dwarf with a mass of only a billion Suns, and it's now the most distant dwarf galaxy whose mass has ever been measured.

Astronomy is beyond believe.

Yes, and the most amazing is not that they can see a galaxy behind another one 6 billion LY away, but that they can measure its mass!! How and how accurately?

I am sure that we will be able to find many such triplets in the future. I don't think it is so rare.There must be enough number of such systems but just that we have not discovered them yet.

The Einstein ring is partly explainable. But when it comes to dark matter(s), I am cynical: the 'dark matter', postulated here as (almost certain) truth ("the unseen dark matter that...") is nothing more than an ill-supported theory.
Strangely, even by professional sites like this, such theories are brought like a very likely truth, while at best the support for it is very flimsy. For details of what I mean, see the article "Modern Cosmology: Science or Folktale?" by Michael J. Disney in the American Scientist, 09/10 2007.

The interpretation of an Einstein ring depends both on theory and observation. First you determine as much as you can about the system from observations, including the distances of the objects and the radius of the ring (or, in this case, the radii of the rings). Then you use modern gravitational theory — that is, Einstein's general theory of relativity — to calculate what types of galaxy mass distributions can produce a lensed image that looks like the one you actually observe.

In the case of the double Einstein ring, the distances to the lensing galaxy and the nearer of the two background galaxies were determined from their spectral redshifts. I asked Tommaso Treu if he was able to get a spectrum of the more distant galaxy, and he replied that he couldn't, not even with an 8-hour observation on one of the 10-meter Keck telescopes. The patchy outer ring is just too faint for spectroscopy with current instruments. So Treu estimated the galaxy's distance from its colors as determined from multiwavelength images.

According to Treu, the only models that fit the observations require the lensing galaxy to be much bigger and more massive than you'd guess from its size, brightness, and distance. That's why he suggests that the galaxy is embedded in a vast cloud of dark matter — invisible stuff that betrays its existence only through its gravitational influence.

Contrary to what Marc suggests in his comment, astronomers have abundant evidence for dark matter on a wide range of scales, from the halos of individual galaxies like our own Milky Way to the large-scale structure of the universe as traced by superclusters of galaxies. But here's where Marc may be right: perhaps we don't live in a universe filled with dark matter, but in a universe in which gravity behaves differently than we think. So far, though, Einstein's general theory of relativity has passed every test astronomers and physicists have put it through.

During the next decade we should get results from several experiments designed to search for dark-matter particles. If the particles are detected, dark matter's reality will be established beyond doubt. If the particles aren't detected, the existence of dark matter will remain an open question. (If the experiments don't succeed, it won't necessarily mean that dark matter doesn't exist. It could just mean that physicists built the wrong kinds of detectors to look for the wrong kinds of particles.)

Einsteins Oouble ring is a mind twist that is hard to get your mind around ,with the twisting of gravity and light.Like the example of the cat in the box whether it is dead or alive.This example would of even confused Einstein, but like most examples are created from life expereance where Einstein is confused whether Lieserl Einstein was alive or not.The thing is that you have to decide whether some thing is a dead thought or alive one, this thought would be used to measure somthing at any distance.I like the idea of something being alive .The double Einstein ring is easy to come to a conclution to even if your confused you are making a good thought of science in action,Like the cat in the box, or the Double Rings system.Just take note of your personel measuring system and how it works for you.