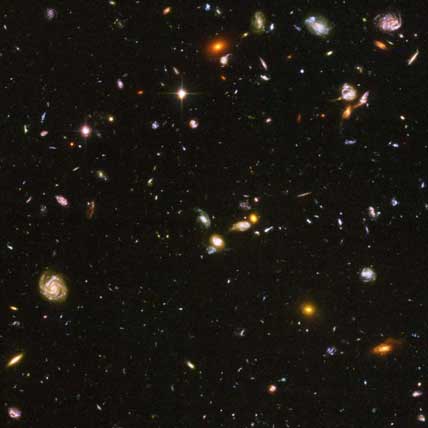 Rich as it is with galaxies of all shapes, sizes, and colors, this is but a small portion of the enormous Hubble Ultra Deep Field (HUDF) image, as recorded by the Hubble Space Telescope's Advanced Camera for Surveys, an instrument that was carried into orbit and installed on the telescope two years ago. The complete image, available online, depicts some 10,000 galaxies in a 3-arcminute-wide piece of the southern constellation Fornax.

The deepest image yet taken of outer space shared the stage Tuesday with what may be the deepest crisis yet for fans of the Hubble Space Telescope.

At the Space Telescope Science Institute (STScI) in Baltimore, Maryland, astronomers and journalists were treated to their first views of the Hubble Ultra Deep Field (HUDF) — stunning images from Hubble's ACS and NICMOS cameras that may portray the most distant galaxies yet captured. The galaxy-studded ACS image was unveiled not only by STScI director Steven Beckwith, who commissioned it, but also by US Senator Barbara Mikulski (D-Maryland), who vowed to fight for the orbiting observatory. "The future of the Hubble should not be made by one man, in a NASA back room, without a transparent process," said Mikulski, referring to NASA administrator Sean O'Keefe's January 16th decision to cancel a long-planned Space Shuttle mission that would extend Hubble's operational life and bring two new scientific instruments into operation aboard what Beckwith called "the most powerful telescope ever built." 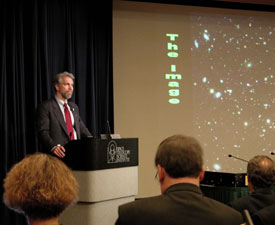 The deepest image ever acquired of the night sky at visible wavelengths, the new ACS view involved a million seconds of observing time and reaches down to 31st magnitude in yellow-green light, showing objects roughly 4 times fainter than those captured by the older WFPC2 camera in the now-famous Hubble Deep Field back in 1995. According to STScI astronomer Massimo Stiavelli, who led the HUDF campaign, the new ACS view may well depict galaxies as they appeared just 700 million years after the Big Bang (that is, when the universe was just 5 percent of its present age).

Furthermore, because light from ever-earlier moments in cosmic history is stretched, or redshifted, by increasingly large factors, NICMOS, with its sensitivity to infrared light, has the capacity to depict HUDF objects only half that age — mere toddlers when compared to mature galaxies like our Milky Way. And if many such toddlers are found, "it'll put our cosmological models into deep difficulty," said University of Arizona astronomer Rodger Thompson, who conducted the NICMOS observations. The reason? Gravity will have had precious little time to build stars or galaxies from the universe's initially ultra-smooth soup of hydrogen and helium. 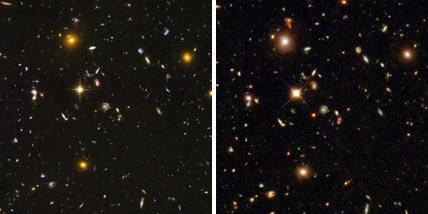 A small portion of the Hubble Ultra Deep Field, as seen in visible light by the Advanced Camera for Surveys, or ACS (left), and at longer wavelengths by the Near Infrared Camera and Multi-Object Spectrometer, or NICMOS (right). Though the ACS image sees fainter objects and shows finer details, the infrared-sensitive NICMOS frame may contain the oldest starlight gathered in the course of the HUDF survey, thanks to redshifts imparted by the universe's expansion.

But no one yet knows how many 350-million-year-old extragalactic toddlers are contained within this 3-arcminute-wide patch of the constellation Fornax. As with the Hubble Deep Field, even HUDF insiders were forbidden from scientifically analyzing the ACS images until they were unveiled on Tuesday. (The infrared NICMOS images of the HUDF, by contrast, were made accessible to researchers one by one as they were acquired over an extended period last year.) However, astronomers worldwide are sure to work around the clock in a race to decode the stories the HUDF promises to tell about galaxy evolution and the universe's earliest phases of starbirth.

All the while, no one knows how much longer astronomers will have the Hubble Space Telescope at their disposal — at present it remains unclear whether O'Keefe's decision, now under review, will stand. Without another servicing mission by space-walking astronauts, Beckwith explained, Hubble's gyroscopes and rechargeable batteries will fail eventually. If a "two-gyro" mode now under study pans out, "we'll get another 12 to 18 months" even after two of the four presently operational units fail, which likely will happen by the end of next year, said Beckwith. But the batteries — originals from Hubble's 1990 launch — "have now exceeded their operational design lifetime," he added, and are showing signs of wear.

Their failure would not only spell disaster for Hubble's cameras and spectrographs; it would make it impossible to control the spacecraft's orientation, possibly leaving it tumbling erratically. And "all of us who know this telescope are scared to death" of this possibility, Beckwith admitted, since it would make it even harder to retrieve the 12&frac12-ton spacecraft and force it to reenter the atmosphere over an unpopulated location on Earth — a task that must be done within a decade should Hubble's previous upgrade, in March 2002, prove to be its last.