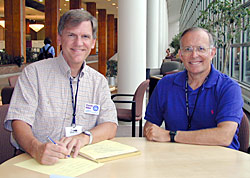 Charles E. Allen (left), the Astronomical League's outgoing president, and Robert L. Gent, his successor, take a break from the action at the League's national meeting in Salt Lake City, Utah. The gathering was hosted by the Salt Lake Astronomical Society.

When the doors opened last month at the Astronomical League's annual convention in Salt Lake City, Utah, local organizers were disappointed that more people didn't join the festivities and enjoy the region's many attractions. But the lower-than-expected attendance belied a burst of activity without precedent in the organization's 55-year history.

For starters, the League now boasts some 20,000 members and 254 affiliated clubs in the U.S. and Puerto Rico. The membership has grown steadily in recent years, thanks in part to an effort to attract more members-at-large (those not affiliated with an astronomy club). But the swollen ranks have strained the organization's scattered network of volunteer officers. So last year they authorized the establishment of a national office in Kansas City, Missouri, and on September 1st executive secretary Jackie Beucher oversaw the "big move" into those quarters.

This year's convention also saw Charles E. Allen step down from his 4-year stint as League president. His successor is Robert L. Gent, a retired Air Force lieutenant-colonel who, while vice president, forged strong ties with the International Dark-Sky Association and spearheaded an effort to attract young people to amateur astronomy. Gent's tenure will be complicated by the fact that he lives in Italy, where his wife is currently assigned to duty.

In past years the League has been most widely known for its efforts to develop members' skills at the eyepiece, both through a network of observing clubs and a series of certificates awarded for various demonstrations of observing prowess. But now the League has undertaken two large projects designed to broaden its reach and likely shape its future direction.

Already well along is the League's effort to place an amateur-class telescope on the International Space Station, which will be dedicated to use by students and amateur observers worldwide. The ISS-AT task force, headed Orville Brettman, has already established a prototype robotic observatory in the Arizona desert linked to a control center at Dyer Observatory in Nashville, Tennessee. The ISS-AT effort took another big step on September 3rd, when Brettman and technical advisor Richard Berry made a formal pitch to a trio of NASA officials at the agency's Washington, D.C., headquarters. "Orv and I both felt that we were taken seriously," Berry comments, "and that all three found the draft proposal intriguing."

The other major initiative is the Student Telescope Network, led by Pennsylvania high-schooler Ryan Hannahoe and University of Denver astronomy professor Robert Stencel. In just a year's time, their robotic 14-inch telescope was used by some 1,700 schools and other groups worldwide. Since then a 60-by-30-foot roll-off-roof structure has been built in rural New Mexico, and Hannahoe hopes to find enough underwriting to expand from the current single-telescope setup to a dozen robotically controlled Celestron 14s in the near future.