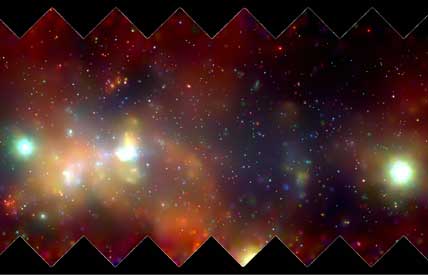 New technology keeps bringing more and more of the mysterious universe into focus — today as in Galileo’s time. Taken by the Chandra X-Ray Observatory, this 2°-wide mosaic is the most detailed X-ray view ever of the Milky Way’s crowded center. Spanning 900 light-years from left to right, it reveals nearly 1,000 compact stellar remnants — white dwarfs, neutron stars, and black holes — as well as gasses heated to temperatures measured in millions of degrees.

Let’s say we weren’t surprised. Three of Science Magazine’s top 10 science stories for 2002 came from the world of astronomy:

A new chapter in the epic saga of the Hubble Space Telescope was written from Earth orbit as astronauts installed the spacecraft’s new Advanced Camera for Surveys and breathed new life into NICMOS, its heat-seeing infrared imager, whose coolant prematurely dissipated four years ago.

A new era also dawned in the search for gravitational waves — ripples in the fabric of space and time, and a key prediction of Albert Einstein’s General Theory of Relativity — with the cross-continental LIGO experiment going into "science mode" for the first time.

Birth inevitably is paired with death. Among several lamented passings, Japanese comet hunter Yuji Hyakutake’s premature death in April saddened those who remember with gratitude his namesake comet, C1996 B2, which spanned the sky as it skimmed Polaris seven years ago. With hindsight, Comet Ikeya-Zhang's presence in twilit April skies seems a fitting tribute. A generation of astrophotographers also mourned the end of Lumicon's operations as a longstanding supplier of imaging and observing accessories.

As a quick search of our online news archive makes abundantly clear, this terse summary only scratches the surface of an amazing year in amateur astronomy and scientific space exploration. That’s why S&T’s editors and contributors — with the help of the worldwide astronomical community — work overtime to keep you in touch with the sky and its myriad mysteries. In the meantime, we wish you a safe and fulfilling New Year.