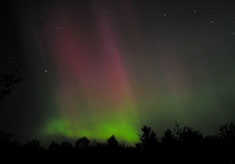 A rare display of the aurora borealis, or northern lights, delighted observers at middle latitudes last Saturday evening. Click on the image to see a composite of four frames showing the aurora's rapidly changing form over the skies of Danbury, New Hampshire.

Their predictions didn't disappoint! On Saturday night observers across Europe, North America, and even in Australia and New Zealand witnessed an impressive display of green curtains, red rays, and flashing lights. The show began approximately one hour after twilight, and provided an encore about three hours later.

Sky & Telescope editor in chief Rick Fienberg and senior editor Joshua Roth were observing from Danbury, New Hampshire, when Roth noticed "a nasty haze" coming up in the northwest shortly before 9 p.m.

"For the next hour or so," says Fienberg, "we watched a very active display, with faint green and brighter red rays and curtains filling the northern sky and, at times, reaching all the way to the zenith. The brightest rays looked like searchlight beams."

Sheldon Faworski of Elizabeth, Illinois, was setting up to shoot CCD images of the Andromeda Galaxy when he was pleasantly delayed in starting by the northern lights. Carol Lakomiak of Tomahawk, Wisconsin, observed: "The aurora was really flaming as twilight deepened, with most of the visual red seen at that time. I began taking pics at 8:22 p.m.(local time) and it seemed to be over by about 9 p.m. During that time, however, it was very active and went so far southward that I was able to get a photo of it hovering just above Sagittarius and Scorpius on the southern horizon."