What's the most confusing thing in all astronomy?

A lot of people would say it's the Sun's complicated atmosphere. Or Earth's magnetosphere. Or anything else that involves magnetohydrodynamics: the motions of charged particles (plasma, or ionized gas — an electrically conducting fluid) embedded in magnetic fields. 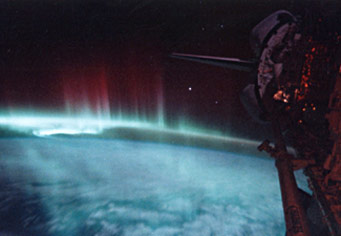 Space Shuttle astronauts sometimes see layers of auroras over the rim of the Earth. Electrons and ions stream down magnetic field lines from Earth's distended magnetosphere. Where they strike the uppermost atmosphere they set different atoms to glowing in different colors. The brightnesses, heights, and colors of the glows depend on the strengths and speeds of the particle beams.

Why is this stuff so hard?

Because ionized gas and magnetic fields interact and force each other around, back and forth and back again, in "nonlinear" ways. Any system like that will burst out with all sorts of unexpected complexities and new phenomena. And in the case of magnetohydrodynamics, it happens in ways that are outside normal, Earthbound human experience and intuition.

So if you wonder why you still can't get straight how the aurora borealis forms, it's not your fault. You've read explanations about electrons traveling down Earth's magnetic-field lines and striking the upper atmosphere. Well, those are just the hand-waving basics that are spoon-fed to the public. Even specialists whose careers are about grasping the magnetosphere haven't really gotten it all. 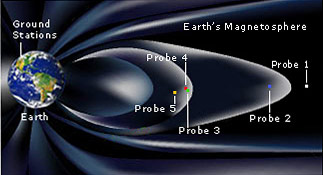 The five THEMIS spacecraft follow highly elliptical orbits arranged so that the spacecraft will line up at apogee (their farthest from Earth) every four days. Their apogees rotate slowly around the Earth to sample the nightside (shown here), dawnside, dayside, and duskside of Earth's magnetosphere. The magnetosphere is distended away from the Sun by the solar wind.

Last week a new piece of this puzzle was announced by scientists working with NASA's THEMIS satellite array. The five THEMIS probes are designed to explore phenomena in the magnetosphere. The group found a new kind of structure, twisted magnetic vortexes, that channel some aurora electrons on their way to us. Someone on the team invented the term "space tornadoes" to try to describe the vortexes to the public. The following is from a press release by the University of California at Berkeley, where the THEMIS group is based:

Earth-bound tornadoes are puny compared to “space tornadoes,” which span a volume as large as Earth and produce electrical currents exceeding 100,000 amperes, according to new observations by a suite of five NASA space probes.

The probe cluster, called Time History of Events and Macroscale Interactions during Substorms (THEMIS), recorded the extent and power of these electrical funnels as the probes passed through them during their orbit of Earth. Ground measurements showed that the space tornadoes channel the electrical current into the ionosphere to spark bright and colorful auroras on Earth.

The findings were presented during a press conference... at the general assembly of the European Geosciences Union (EGU) in Vienna, Austria.

Space tornadoes are rotating plasmas of hot, ionized gas flowing at speeds of more than a million miles per hour, far faster than the 200 m.p.h. winds of terrestrial tornadoes, according to Andreas Keiling, a research space physicist at the University of California, Berkeley’s Space Sciences Laboratory. 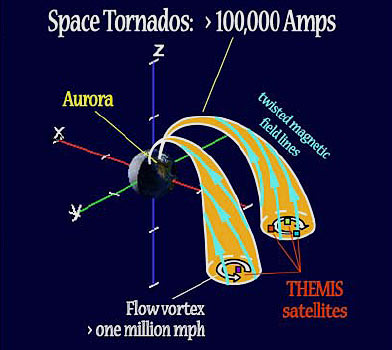 A graphic from the scientists' press conference. Spiral magnetic vortexes channel electrons from Earth's magnetophere down to the atmosphere.

Keiling works on THEMIS, which was built and is now operated by UC Berkeley. The five space probes were launched by NASA in February 2007 to solve a decades-long mystery about the origin of magnetic storms that power the Northern and Southern Lights

Both terrestrial and space tornadoes consist of funnel-shaped structures. Space tornadoes, however, generate huge amounts of electrical currents inside the funnel. These currents flow along twisted magnetic field lines from space into the ionosphere where they power several processes, most notably bright auroras such as the Northern Lights, Keiling said.

While these intense currents do not cause any direct harm to humans, on the ground they can damage man-made structures, such as power transformers.

The THEMIS spacecraft observed these tornadoes, or “flow vortices,” at a distance of about 40,000 miles from Earth. Simultaneous measurements by THEMIS ground observatories confirmed the tornadoes’ connection to the ionosphere.

Somehow, I still don't picture the whole setup any better.

You can watch the scientists' press conference at the Vienna meeting. They're doing their best.

Actually this precise explanation was lucidly outlined by Alfven in his 1981 book "Cosmic Plasma". He summarizes and develops the much earlier by Birkeland who proposed that the auroras were caused by intense magnetic field-aligned electrical currents that form vortex structures in the magnetosphere which transport charge from the neutral sheet to the ionosphere in a closed circuit. The currents are powered by explosive double layers recently confirmed by THEMIS.

Yaeh it still a bit cofusing but arouras are still cool. Still sound like something to look at.

Yaeh it still a bit cofusing but arouras are still cool. Still sound like something to look at.