When Earth's magnetic field tangles with that of the Sun, beautiful auroras ignite our night skies. Electrons and charged particles, driven by the solar wind, rain down on the Earth's upper atmosphere, lighting up the polar regions in a dazzling, ethereal display. But auroral displays aren’t unique to Earth. They’ve also been observed on Jupiter and Saturn. And now, an international team of astronomers have announced their findings on auroras on other stars. 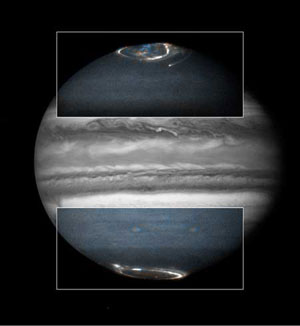 Aurorae hover in ovals around Jupiter's north and south poles. Jupiter serves as an analogy in a recent study by Jonathan Nichols and his colleagues as they study auroral displays on brown dwarfs and dwarf stars.

The group, led by Jonathan Nichols (University of Leicester), showed that ultra-cool dwarfs, objects much smaller and colder than the Sun, demonstrate auroral behavior similar to Jupiter and Saturn. Ultra-cool dwarf is a catch-all term for the runts of the star formation litter: low-mass stars and failed stars known as brown dwarfs are all roughly Jupiter-sized and emit just a few percent of the Sun's luminosity.

Still, even with such low masses and temperatures, these objects can generate magnetic fields 10,000 times stronger than Earth’s. Astronomers can’t observe these fields directly, but they can infer their presence by the radio waves produced when the fields interact with charged particles.

Such interactions don’t occur on every ultra-cool dwarf — only 12 (out of roughly 200 observed) are known to produce intense radio emissions. These objects all have one thing in common: rapid rotation. They spin dizzyingly fast, completing a rotation every few hours. Many of the radio signals observed have a periodic beat, likely due to the objects’ rotation.

Analogs of radio-emitting stellar runts can be found closer to home: Jupiter and Saturn both generate strong magnetic fields and complete rotations once every 10 hours or so. Some of these planets’ radio emission has been linked to auroral activity, suggesting that similar processes may be important in the ultra-cool dwarfs as well.

Nichols and his team modified models of Jupiter’s magnetic field, scaling the planet’s rotation and field strength to that observed for ultra-cool dwarfs. Their simulation was able to reproduce the strength and beat of the observed radio signals. According to their model, the radio signals emanate from the dwarfs’ high-latitude polar regions, just like the radio signals seen from auroral ovals on Jupiter, Saturn, and Earth. This result implies a strong coupling between the stars, their magnetic fields, and the space environment around them, similar to the Earth's own magnetic field and the solar wind.

Here’s how it works: as a dwarf’s upper atmosphere interacts with the magnetic field around it, the high-latitude regions end up rotating more slowly than latitudes nearer the equator. Radio waves are produced as different layers of the atmosphere rub by each other.

If this theoretical picture is correct, more observations of auroras on other stars may be just around the corner. New radio telescope arrays, such as the Atacama Large Millimeter/submillimeter Array and the recently upgraded Karl G. Jansky Very Large Array will provide more sensitive observations of the auroras dazzling the upper atmospheres of faint stars and brown dwarfs.

Concerning magnetic fields, the article says, "Astronomers can’t observe these fields directly...". Are the "stellar runts" too faint to see Zeeman splitting in their spectra?