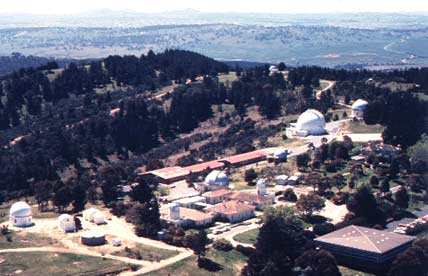 Mount Stromlo Observatory is situated about 10 kilometers west of Canberra, Australia. In this aerial view, taken before wildfires destroyed the complex, the dome for the 1.3-meter (50-inch) Great Melbourne telescope is in the center foreground. The 74-inch dome is the largest one at upper right.

A ferocious bushfire swept across the western outskirts of Canberra, Australia, on January 18th, destroying the extensive observatory compound atop Mount Stromlo. "The fireball came up the mountain and gutted everything inside," reports David Herald, an occultation specialist who lives in the area. "Yesterday afternoon here was a living hell." News reports from the Sydney Morning Herald and other media outlets showed burned-out domes and the incinerated tubes of the historic instruments they housed.

At least six telescopes have been lost, including the 1.9-meter (74-inch) Grubb-Parsons reflector, the 1.3-meter (50-inch) Great Melbourne telescope, and the 0.7-meter (26-inch) Yale-Columbia refractor. Also destroyed were the 23-cm (9-inch) Oddie refractor, which was installed on the summit in 1910, and a laser-ranging station with its 1-meter telescope. The fire then consumed the main administration building, which housed the observatory’s library, but the visitor's center and two office buildings containing computerized archives were spared. Ian Grubb, vice chancellor of Australian National University, stated, "Plans are already being put in place to rebuild at Mount Stromlo and restore the research school to its full capacity."

These views of one of the domes at Mount Stromlo Observatory, captured from an Australian television broadcast, show the facility before and after it was gutted by fire on January 18, 2003.

Perhaps the most significant scientific loss, reports John Howard of the Canberra Astronomical Society, was the workshop containing a $5-million imaging spectrograph known as NIFS. The nearly completed instrument was just months away from being shipped to the 8-meter Gillett (Gemini North) telescope atop Mauna Kea, Hawaii.

About a week ago lightning triggered a series of bushfires in Namadgi National Park, about 30 kilometers southwest of Canberra. The region’s inaccessibility, coupled with tinder-dry conditions brought on by an extended drought, left firefighters unable to extinguish them. On Friday, however, the situation turned disastrous as strong westerly winds whipped the fires into a frenzied inferno, with embers touching off blazes far ahead of the rapidly advancing, 40-km-long fire front. In addition to the destruction atop Mount Stromlo, some 400 homes and four lives had been lost by Saturday afternoon. 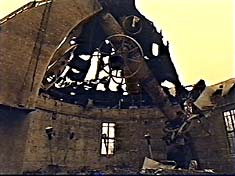 As this television image shows, little remained of the 26-inch Yale-Columbia refractor after fire swept through Mount Stromlo Observatory. Built in 1924 and first used in South Africa to measure star distances, the venerable telescope was moved to Australia in 1952.

The danger from Australia’s worst-ever bushfires is not yet over. With more hot, windy weather forecast and no rain in sight, the fire may ravage an even greater area. Canberra’s main sewage-treatment plant has been overrun three times since Friday, damaging equipment there. Once the rains do come, ash-charged runoff may foul the fresh-water reservoirs that supply the city. Steve Massey, reporting from Sydney, comments, "A red afternoon Sun seems commonplace these days, while the full Moon the other night replicated the deep red hue of a total lunar eclipse!" 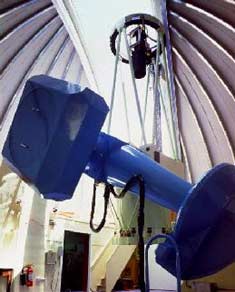 Fire destroyed Mount Stromlo Observatory's 1.3-meter (50-inch) telescope — and many others — on January 18th. Built in 1868, the 'Great Melbourne Reflector' joined the growing complex on Mount Stromlo in the the 1940s and was completely refurbished in the 1990s.

Australian astronomers are still reeling from the loss of their historic facility, which sustained an estimated $20 million in damage. The 80-member staff of Mount Stromlo and Siding Spring Observatories (renamed the Research School of Astronomy and Astrophysics in 1998) had been poised to become a world leader in advanced-detector technology. Just last month the team bested an international field of competitors for the right to build a $6.3-million camera for the Gemini South telescope in Chile. The Great Melbourne telescope was instrumental in detecting a type of dark matter called Massive Compact Halo Objects, or MACHOs. Other ongoing research atop Mount Stromlo included a search for dim objects in the distant Kuiper Belt and an effort to map the entire southern sky.

The fire advanced on the summit so quickly that the observatory staff had only 20 minutes to evacuate. No one there was injured, but the fire consumed the homes of eight staff members. Responding to the many individuals worldwide who've offered assistance, officials at the Australian National University, which operates the facility, have established three relief funds to assist in Mount Stromlo's redevelopment and to provide aid for displaced students and staff.

Meanwhile, the fires threatened — but did not damage — NASA’s Canberra Deep Space Communications Complex at Tidbinbilla, 40 km southwest of the city. "We were quite fortunate," notes CDSCC spokesman Glen Nagle, as brushfires advanced to the perimeter fence but no further. "The antennas are secure," he says, though tracking operations were suspended for four hours on Saturday afternoon during the fire’s peak.