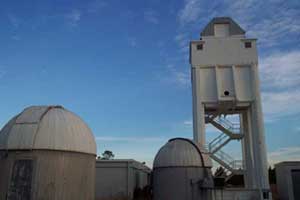 NASA's Automated Lunar and Meteor Observatory, in Huntsville, Alabama, has three telescopes, including one atop a 50-foot tower.

Every night you can see the evidence of space debris hitting Earth. Meteors flash across the sky randomly or as part of annual showers. Furthermore, we know that space rocks regularly hit Earth and continue to pummel Mars, so it makes sense that this is also still happening on the Moon.

With humans planning a return to the Moon, it would probably be a good idea to know how often potentially dangerous stones hit the ground. The Moon has no atmosphere, thus meteoroids fall unimpeded and smack into the lunar surface at more than 12 miles per second. The kinetic energy of a basketball-size rock can blast a crater meters across, spreading debris even farther.

NASA is looking for lunar impacts, wanting to determine the frequency of objects of more than about a pound (500 grams). A project conducted by NASA's Marshall Space Flight Center in Huntsville, Alabama, uses video to monitor the night side of the Moon to catch brief flashes of light as pieces of debris vaporize when they strike the airless surface.

With dozens of potential impacts detected already, the three telescopes at the Automated Lunar and Meteor Observatory in Huntsville have been joined by a 14-inch reflector at Walker County Observatory in Chickamauga, Georgia. A mere four days after a the new observatory went online last month, it caught a strike on just two 1/30-second frames of video.

This second station is vitally important. Having widely separated detectors watching the Moon at the same time reduces the chances of false finds, such as when sunlight glints off a piece of orbiting spacecraft debris. If multiple stations see a flash on the same area of the Moon, then they caught a meteor hit.

For more details, including how you can participate in this program, see NASA's Lunar Impact Monitoring page.

I thought we couldn't see the night side of the moon from earth? Anyone care to clarify?

Cy, you are confusing the night side of the moon with its far side. Look up any night when the moon is not full and you'll see some "night side."

Dave, an object striking the moon's surface at 12 miles per second is vaporized in the impact. A gaseous atmosphere is not required.