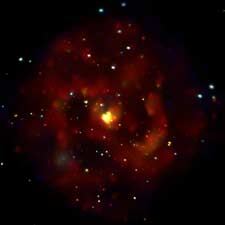 Buried deep within the spiral galaxy M83 is a dense and tumultuous star-making factory in a bagel-shaped volume around the galaxy's nucleus. The Chandra X-Ray Observatory captured this high-resolution image in an hour and a half exposure, also revealing a large population of X-ray binary stars and an envelope of scorching-hot ionized gas, say Roberto Soria (University College London) and Kinwah Wu (University of Sydney).

These two images of M83 in visible light (left) and X-rays illustrate the power of multiwavelength surveys. The white box shows the area covered by the left image.

X-ray binaries are dual star systems in which a black hole, neutron star, or white dwarf ravenously feeds off its companion star, diminishing the companion's mass. The gravitational attraction on the infalling material is so strong that when it hits the surface of the more dense object, it heats the spot to X-ray temperatures.

M83 holds an abundance of such binaries. Over time, the central zone of this 12-million-light-year distant galaxy became a mecca for black holes, neutron stars, and supernova explosions, spawning a thick gas cloud of carbon, silicon, neon, sulfur, and magnesium around itself. The gas cloud, observed for the first time in this image, is growing more chemically diverse as the nucleus ages and ejects other elements into it.

M83 is located in Hydra and shines at magnitude 7.5.