Look at any dense grouping of galaxies, whether it's the Virgo Cluster seen these April evenings through a backyard telescope or one of the penetrating "deep fields" recorded by the Hubble Space Telescope, and you get the distinct impression that galaxies are not scattered randomly through the universe.

Beginning with pioneering surveys of the early 1980s, astronomers have learned that galaxies, when mapped in three dimensions, are concentrated along strings and sheets that enclose huge, nearly empty voids. On the very largest scales of tens and hundreds of millions of light-years, the universe has a frothy, spongy-looking structure. It's all bubbles and walls.

Since then 3-D galaxy surveys have increased dramatically in breadth, depth, and sensitivity. To date the most ambitious census is the Sloan Digital Sky Survey, which has cataloged some 930,000 galaxies in the northern sky. Using a dedicated 2.5-meter telescope in New Mexico, the SDSS effort determined the spectral redshift (recession velocity) of each galaxy and used that as a proxy for its distance. The result was an unprecedented 3-D view of the cosmic-sponge structure. 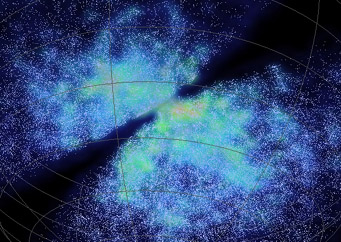 This 3D map of the southern sky, which plots the positions of some 110,000 galaxies, reveals large-scale bubbles and voids in intergalactic space. Our Milky Way is at the center. Click here for a larger view.

But the Sloan survey covered only about a fourth of the entire sky, little of it in the Southern Hemisphere. So beginning in May 2001 a team of Australian, U.K., and U.S. astronomers kicked off a five-year effort to map galaxies across most of the southern sky. It's known as the 6dF Galaxy Survey, because it used the 48-inch (1.2-m) UK Schmidt Telescope having a nearly 6°-wide field of view — thus the "6dF."

Last week, Heath Jones (Anglo-Australian Observatory), leader of the 6dF team, announced that the survey is at last complete. All told, the effort recorded the positions and spectra of more than 110,000 galaxies over 41% of the sky — about twice the areal coverage of SDSS and a tenfold increase over the previous best southern survey, dubbed the 2dF Galaxy Redshift Survey.

This latest effort doesn't probe intergalactic space as deeply as Sloan's did; its look-back distances range out to no more than 2 billion light-years (corresponding to redshifts, z, of 0.5 to 1.5). Still, its highly detailed maps reveal more than 500 voids in the deep southern sky.

Knowing where to steer your intergalactic starship is nice, but the 6dF team is also using about 10% of the amassed spectra to sort out what part of a galaxy's velocity is due purely to the expansion of the universe and what part is its own small "peculiar velocity" with respect to its surroundings.

Astronomers believe that peculiar velocities, the consequence of galaxies being tugged around by other massive objects in their vicinity, are the key to finding how much gravitational force they experience from unseen dark matter. As best we can tell, only about 4.5% of the universe's total matter-and-energy exists as normal matter, the kind we can see directly. Much more, about 22%, is thought to be dark matter made of "nonbaryonic" particles (not the protons and neutrons that constitute almost all the mass of stuff made of atoms).

The "dark energy" (anti-gravity, if you will) appears to be the remaining 74%.

I haven't yet acquired a taste for dark matter — I'm more a "white matter" kind of guy. But I sure enjoy ogling the 6dF project's maps of the southern sky at high-res and the nifty fly-through animations assembled by the team. Check them out here.

Do I detect a word of caution concerning dark matter at the end of this report? I hope so. There is darkness in big bang cosmology. The big bang cosmology features the universe evolving through the Cosmic Dark Ages, dark matter to make the first stars and galaxies, and dark energy accelerating the rate of expansion of the universe. I wonder if many readers here knew about the Crisis in Cosmology 2: Challenges to Consensus Cosmology and the Quest for a New Picture of the Universe during 7-11 September 2008? There is an Alternate Cosmology group out there folks. I read about this in a recent report by Hartnett, J. Crisis in cosmology continues with conference of big bang dissidents, JOC 23(1):3-4, 2009.

Thanks for the link to the 6dFS website. It's chock full of info & pix!