The Astronomical League began its annual meeting today in Des Moines, Iowa. It's a combined meeting of the AL and the Association of Lunar and Planetary Observers (ALPO). J. Kelly Beatty left this morning to attend the conference where he will give a talk tomorrow. 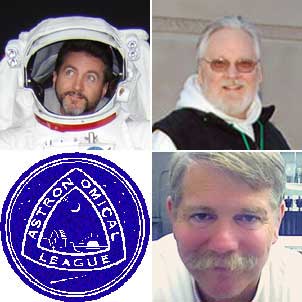 Among the other events throughout the next two days will be an awards ceremony that will include presenting the League's Webmaster Award. The distinction is given to "acknowledge the club Webmaster who does an outstanding job of website design and administration." The winner was announced late last week.

So if you see Del Gordon, congratulate him on winning the 2008 AL Webmaster Award for his work with the Huachuca Astronomy Club in Arizona. Based on his submitted portrait, he seems like an easy-going guy.

Second place went to Chas Rimpo of the Howard Astronomical League in Maryland.

Third place went to Richard Richins of the Astronomical Society of Las Cruces in New Mexico.

Once again I was happy to be a judge in evaluating the 10 submissions. Other judges were Drew Carhart, the 2006 Webmaster Award winner from the Naperville Astronomical Association, and Matt Ganis, who works at IBM.

Our evaluations were tallied by Bob Schneider, of the Boise Astronomical Society, administrator of the Astronomical League Webmaster Award.