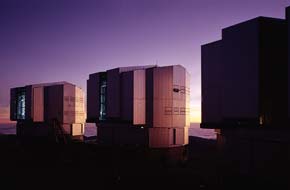 Thanks to the power of television, you'll be able to watch as the giant glass eye of one of these telescopes is removed, cleaned, and refreshed.

Fellow editor and sometime couch potato Dennis di Cicco told us all today at our editorial meeting that if you don't want to watch the last U.S. presidential debate, you may want to tune in to the National Geographic Channel for an episode of World's Toughest Fixes.

I've seen the ads for this show, but have yet to watch it. I'll at least be recording this week's episode airing at 10 p.m. EDT Wednesday (check the NGC's website rebroadcast times throughout the next three weeks). The host, Sean Riley, will be atop Chile's Cerro Paranal to watch (help?) technicians realuminize one of the 8.2-meter mirrors of European Southern Observatory's Very Large Telescope (VLT).