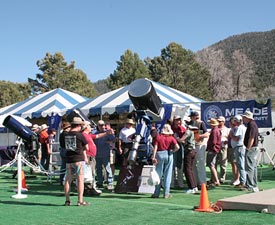 The promise of dark skies and great bargains on new and used equipment drew more than 1,000 stargazers and their families to the 2006 RTMC Astronomy Expo in the mountains near Big Bear, California. Originally known as the Riverside Telescope Makers Conference, the event — held every Memorial Day weekend — is one of the biggest and most popular star parties in the United States. This year's conference coincided with the new Moon, making it especially attractive to urban and suburban backyard astronomers eager to take advantage of clear, dark mountain skies.

High winds on Friday night and near-freezing temperatures on Saturday night kept many telescopes (and many telescope operators) under wraps, but hundreds of others braved the elements and plied the star-filled skies with instruments ranging up to 36 inches in diameter. Daytime activities included telescope-making displays, beginners' workshops, lectures by prominent amateur and professional astronomers, a swap meet, and the opportunity to browse dozens of vendor displays, where many new products were exhibited for the first time, and where bargain-hunters gleefully parted with large amounts of cash.

On the telescope field, attendees gravitated toward the huge Meade Instruments display, where the star attraction was a prototype of the company's new 20-inch RCX400 telescope on the giant Max robotic German equatorial mount. Meade representatives created quite a buzz with their announcement that the newest version of their AutoStar Suite software, which comes standard with most of the company's Go To telescopes, will support remotely controlled observing through a simple Web-browser interface. 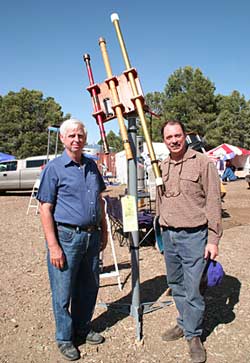 RTMC has always featured exceptional handiwork by amateur telescope makers. Two innovations attracted particular attention this year. Planetary scientist Alan Binder, who led the Lunar Prospector mission, and astronomy writer Ken Graun, author of numerous books for backyard stargazers, unveiled a trio of historically accurate working replicas of Galileo's telescopes. Most observers who looked through them were simultaneously impressed by their optical quality and dumbfounded at their minuscule fields of view.

The other conversation-starter on the telescope field was Norm and Laura Nasise's telescope-toting SUV, a 2004 GMC Envoy with a built-in 14-inch Meade LX200 telescope. Laura came up with the idea when she saw the vehicle's large moon roof, and Norm constructed the system that raises the scope for viewing and lowers it for storage. He drives the portable observatory to many California high schools to share views of the night sky with students, who are thrilled when deep-sky images appear in real time on his camera system's 30-inch monitor. 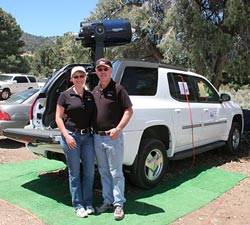 Norm and Laura Nasise of Red Bluff, California, showed off their telescope-toting SUV at the 2006 RTMC Astronomy Expo. Once they drive their modified GMC Envoy to a suitable observing site, they elevate their 14-inch Meade LX200 through the moonroof.

Saturday night's keynote speaker was Caltech astronomer Michael Brown, leader of the team that discovered 2003 UB313, the "10th planet" beyond — and slightly larger than — Pluto. He drew a standing-room-only, overflow crowd. Acknowledging that the International Astronomical Union has yet to agree on whether to call the object a planet, he offered an eloquent argument for doing just that, saying that the word "planet" is not a precise scientific term, but a cultural one. He likened it to the word "continent." Geologists have no precise definition of a continent, said Brown, yet schoolchildren the world over can tell you that there are seven of them, then rattle off their names — just as they can rattle off the names of the nine planets known before his team's discovery of 2003 UB313.