With all the hubbub over LCROSS's confirmation of water on the Moon, it's easy to lose sight of NASA's primary mission there, the Lunar Reconnaissance Orbiter. But so far, LRO's observations have been "breathtaking," says project scientist Richard Vondrak. 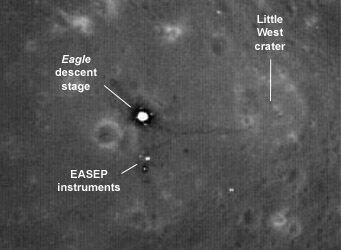 Taken from just 30 miles (50 km) up, this view from the Lunar Reconnaissance Orbiter Camera reveals incredible details at Tranquility Base, the landing site for Apollo 11 and its crew in July 1969. Click on the image for a larger view.

Exhibit A is this view of the Apollo 11 landing site acquired on October 1st (but not released until November 9th) by the spacecraft's high-resolution stereo camera, LROC. It reveals details at the Space Age's most hallowed ground down to about 2 feet (53 cm).

Spend a little time perusing the image at right — or go moonwalking yourself by downloading a larger version or even the original image. The LROC team released a lower-resolution view of the landing site a couple of months ago, but now the spacecraft is in its final mapping orbit, a scant 30 miles (50 km) above the lunar surface.

You can easily see the squarish descent stage of the lunar module Eagle, which looks washed out because of contrast enhancement — look closer, and you'll make out its footpads too. Dark trails are the paths made by astronauts Neil Armstrong and Buzz Aldrin as they walked near Eagle and around the Early Apollo Science Experiments Package (EASEP). 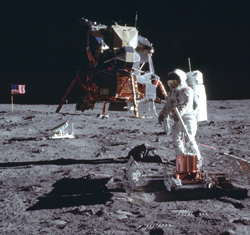 Apollo 11 astronaut Buzz Aldrin deploys the EASEP instrument package on Moon, with the lunar module Eagle in the background.

A few weeks ago, the LROC team released a video tour of the Apollo 17 landing site — amazing stuff! I guess those who still believe that NASA faked the lunar landings would argue that these pictures have been doctored.

It's hard to believe, but just a year ago, five spacecraft were orbiting the Moon — none of them launched by NASA. India and China had one each (Chandrayaan 1 and Chang'e 1, respectively), while Japan's Kaguya and two small escorts, named Okina and Ouna, were mapping the Moon inside and out.

Waiting in the wings was LRO, which began circling the Moon last June. Designed and built at a time when the U.S. and its space agency were firmly committed to returning humans to the Moon, LRO is a recon mission in the truest sense. Its seven-instrument payload reflects NASA's desire to understand the lunar features and resources that could influence the design and placement of future lunar settlements.

For example, the spacecraft's low polar orbit should allow its cameras to record the entire globe with 100-meter resolution and up to 10% of the surface with unprecedented 0.5-meter resolution — good enough to spot hazardous boulders in likely landing sites. (In fact, the view here shows boulders from West crater, which lies out of view to the right in the Apollo11 view above.) A radar mapper and a laser altimeter are gauging the slope and roughness of the terrain. The Diviner instrument has been recording temperatures from pole to pole, and a Russian-built neutron spectrometer is finding the "sweet spots" where deposits of water ice lie buried. Finally, a cosmic-ray telescope has been assessing the hazard that space radiation poses for future explorers.

LRO's early efforts concentrated on the lunar poles, in order to pick the best target for LCROSS and the Centaur rocket that carried both craft to the Moon. But Vondrak hopes that LRO can continue clicking and scanning the lunar landscape for at least two more years. Plans call for modifying the orbit periodically to optimize coverage, ending with the spacecraft in a gravitationally stable "frozen orbit" with a low point almost directly over the Moon's south pole.

People who believe the landings were faked will never believe anything different. To them its always just a game of "moving the goal post". Show them any proof and they simple move the goal post and demand more. How can you prove something is not fake if a fake in their minds can always be made to look real?

We in the scientific community would do ourselves a great favor and become familiar with all the conspiracy theories out there (9/11, Moon Hoax, Big Pharma, Big Oil, and many many others) and make sure we don't accidentally give more credence to them. We in the science community know better, but alas many in the general population do not.

I guess what I am trying to say is perhaps even mentioning it in the context of the article was a mistake.

I'm 64. As a teenager working in my grandfathers' shop, I met a man that profoundly believed the world was flat, despite crude but visible film (video tape wasn't quite ready) at the time from sub-orbital rockets that showed clearly the curvature of the earth. When I confronted him with this, he told me I was young and that the pictures were fake. I remember his saying, "Only a fool would believe the world was round, why hell you'd fall of it if it were!" One lesson out of this, is that science will always be confronted by skeptics. If you believe in your science, stick to it, you'll never change the skeptics, but you might just change the world.

I agree with Jeff & Dave 100%. I believe that people with
"wild logic & ideas will say that the Sun rises in the South
and an X-number of other things! What, if anything, will alter their thoughts?

A ham radio operator, K2RIW, still living on Long Island. Built and used radio equipment to listen to the Apollo astronauts while en route to the Moon and while on the surface. As he points out it would be impossible for the source of the emissions to be faked for him and others simultaneously, especially considering no one even knew of his existence and what he was doing. I believe he still has recordings he made during the events.

I have talked to many people who believed that the landings were faked. By putting the burden of proof on their shoulders, it is fairly easy to convince them that their position is untenable. For example: show them one of the videos where the dirt kicked up by the astronauts boots always follow a perfect arc and never swirls as it would if affected by air. Then get them to explain how to make a vacuum chamber the size of a football stadium, that would have been needed to fake those videos.
As with big Pharma, it is easy to prove they are motivated by profit. You can go to any university library and pick up the paper trails that show how many drugs are worse than placebo in the long term, by the studies done by the medical profession themselves.
What I'm saying is, carefully listen to both sides of the debate, trying to understand what each side is saying, and what is motivating them to do so. Only after unbiased research can you make an informed choice as to who's right. Avoid language like "Moon Landing Denialists" which is simply an insult carrying no scientific weight, and actually hurts your position.