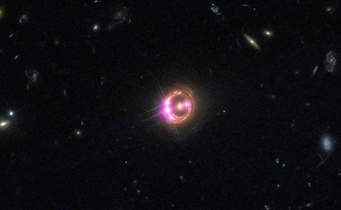 This composite of images from NASA”™s Chandra X-ray Observatory and the Hubble Space Telescope reveals multiple images of a distant quasar. (Each of the four bright pink points around the ring is an image of the region around the same supermassive black hole.) Astronomers used Chandra and XMM-Newton data to measure how quickly the black hole is spinning.

Astronomers have peered into a distant galaxy and caught its supermassive black hole spinning at nearly 90% of its maximum allowed value. The black hole is the most distant yet for which observers have achieved this measurement, and the success may open a new window into how black holes grew in the universe’s last several billion years.

A supermassive black hole that is spinning rapidly probably glutted itself on a steady stream of gas, which has revved up the object’s rotation like the way water from a garden hose spins up a beach ball.

On the other hand, a black hole with a slow spin might have fed on gas coming in from all directions. Or it might be the result of two smaller black holes merging: when two black holes merge, their spins can sometimes partially cancel each other out.

Astronomers have robust spin measurements for about two dozen “local” active galactic nuclei (AGN), cosmic beacons powered by gobbling supermassive black holes at the centers of galaxies. The signals from these black holes generally reach us from the universe’s last 2.5 billion years (in astrospeak, a redshift of 0.2 or less), and mostly from the last 300 million years (less than 0.02).

Observers estimate spin using X-rays and a bit of assumption. The assumption goes, a hot corona of relativistic electrons above and below the accretion disk produces X-ray photons. These X-rays reflect off the innermost disk, where spacetime is warped and dragged around by the spinning black hole. The X-rays then fly off into space, carrying with them the spectral fingerprints of how the black hole has twisted spacetime, which in turn is related to the black hole’s spin.

Rubens Reis (University of Michigan, Ann Arbor) and colleagues have now taken this method farther than ever before. They observed 1RXSJ113151.6–123158, an AGN whose emission has traveled 6 billion years to reach us (giving the object a redshift of 0.658). Inside RXJ1131’s core lies a black hole of about 200 million solar masses. 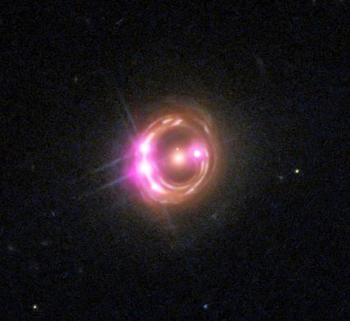 A close-up of the gravitational lens. The four bright pink dots around the ring are each an image of the same distant quasar. By studying the X-ray spectra of these four images, astronomers calculated how fast the quasar's central supermassive black hole is spinning.

This AGN is unusual because from Earth’s vantage point, it lies behind a much closer elliptical galaxy. The nearby galaxy’s gravity lenses the AGN’s emission, creating four duplicate images, each magnified by roughly a factor of 10. Because they’re magnified, the X-rays from near the black hole are easier to decipher. Reis’s team carefully analyzed the X-rays and estimated that the black hole’s spin is about 87% of its maximum allowed value (and there’s only one chance in 3.5 million of the spin being below 66%).

“Bottom line: great paper,” says Laura Brenneman (Harvard-Smithsonian Center for Astrophysics). The team’s careful analysis and impressive attention to detail when tracking down sources of error make the conclusions both believable and intriguing, she explains.

The high spin implies that the black hole ate from a coherent stream of gas coming in at it from a beefy accretion disk. Coauthor Mark Reynolds (University of Michigan, Ann Arbor) says there are a number of other lensed systems that the team hopes to study as well, expanding our knowledge of how black holes have grown in the second half of the universe’s history.

But Brenneman cautions that it’s too soon to say anything on that point yet: RXJ1131 is just one object, and there’s a whole universe of black holes out there. She suspects that in the coming decade astronomers will only be able to expand the lensing work to tens of sources at most. They’ll need next-gen X-ray missions (such as the Athena+ mission proposed to ESA) to study additional objects.

Very interesting article, but can we be careful about how we use the prefix "super", please? Supermassive, superfast, it sounds just like tv-advertisements aimed at the very young and the profligating regrettably ignorant where the repeated bludgeoning with the word "super" is aimed at getting a sale. Supergiant there is a case for, supermassive possibly, but there is no place for superfast in science.

Is it ok to ask the obvious question? How fast exactly is it spinning? Are we talking rpm here or rpyear? Or what? And what is the maximum and how/why is it constrained?

John Exter, that's a great question -- and I wish I had a solid answer for you! Astronomers put black hole spin in terms of "a," where a can range from 0 (not spinning) to 1 (the maximum spin for the black hole). For this particular black hole, the spin is a = 0.87 -- in other words, 87% of its maximum. When I asked if the spin could easily be put in terms of, say, the speed of light, I was told no. 🙁 The spin is a measurement of how spacetime itself is twisted. Another black hole I wrote about (http://skyandtelescope.org/community/skyblog/newsblog/Black-Hole-Caught-Spinning-193649081.html) had a spin of a = 0.84; for that object, one researcher calculated that a person standing near the event horizon would be turning around once every 4 minutes just to stand still. But that black hole is about 1/100th as massive as this one in RXJ1131, and spin is dependent on a black hole's mass, so it's hard to extrapolate. (Actually, if you're curious, the calculation for spin is a=Jc/(GM^2), where J is the black hole's angular momentum, c is light speed, G is Newton's gravitational constant, and M is the black hole's mass.) . .. that's probably more than you were looking for, sorry! 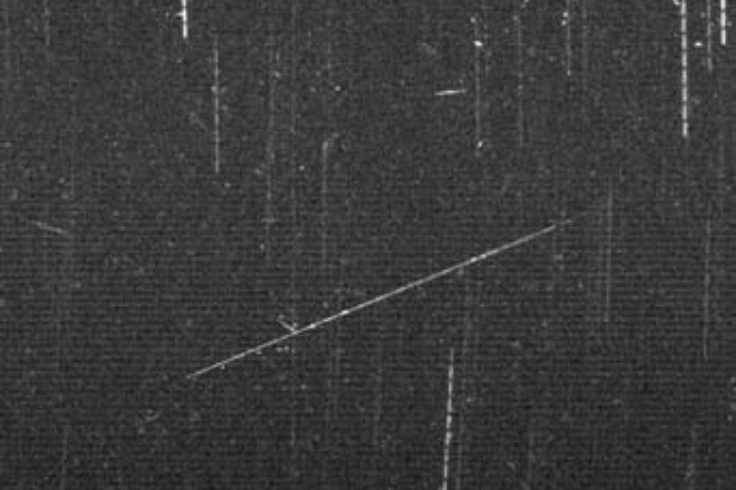