The American Astronomical Society's 214th meeting in Pasadena, California, kicked off in earnest on Monday. 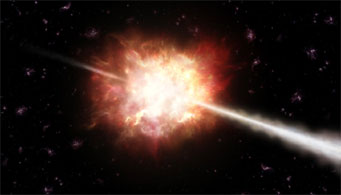 An artist's impression of a Gamma Ray Burst

Daniel Perley, Joshua Bloom (both at the University of California, Berkeley), and their colleagues may have solved one of the biggest mysteries surrounding powerful stellar explosions known as gamma-ray bursts (GRBs): the nature of “dark” bursts. The astronomers used the Keck and Palomar observatories to follow up 29 GRBs detected by NASA's Swift satellite. Fourteen of these were classified as dark GRBs, which do not have a strong visible-light afterglow. Some previous theories have held that the visible component is not observable because many of the bursts are so far away that their visible light is redshifted by the expansion of the universe into the infrared part of the spectrum.

Though there was one high-redshift GRB in the sample, the vast majority of the bursts were clearly embedded in visible galaxies. Since the light from these galaxies was still in the visible spectrum, there had to be another explanation for the bursts' weak visible component. The culprit appears to be dust around the burst, which absorbs visible light but not gamma rays. The dust could be local to the region where the stars that make GRBs were born. 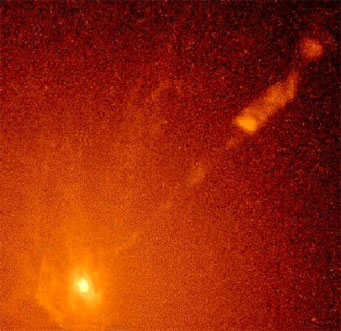 Galaxy M87, as seen by the Hubble Space Telescope.

Few high-redshift GRBs would indicate that there were not as many bursts early in the universe’s history as some theories predict. Bursts, emanating from massive stars, are associated with star formation, and so a lower rate of very early bursts would also suggest a slower rate of star formation in the early universe.

In other results announced at the conference, astronomers unveiled two methods for refining the Hubble constant, the rate at which the universe is currently expanding.

James Braatz (National Radio Astronomy Observatory) used a network of radio telescopes to obtain a geometric measure of the distance to water-bearing clouds in the distant galaxy UGC 3789: 160 million light-years, plus or minus 15%. Based on simple geometry, Braatz says this method is more accurate and direct than other ways of measuring distances to faraway galaxies. His reading of the Hubble constant, 71 kilometers per second per megaparsec, agrees nicely with previous measurements, such as those made by the Hubble Space Telescope. 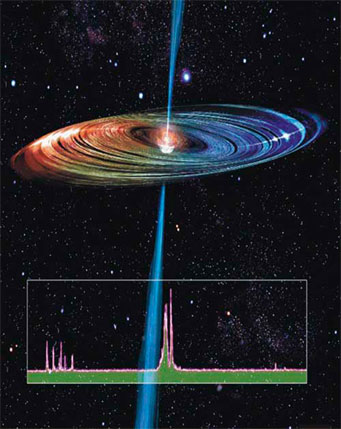 An artist's impression of a water maser, showing it's redshift/blueshift.

Jonathan Bird (Ohio State University) described how ultra-long-period (near 100-day) Cepheid variable stars could be used to extend the reach of galaxy measurements. Astronomers can use shorter-period Cepheids to estimate distances of galaxies out to about 80 million light-years. But the longer-period Cepheids could extend this method to greater distances.

Astronomers recognized the importance of shorter-period Cepheids in the early 20th century because their intrinsic brightness relates to how long it takes for one to wax and wane over time. This relationship has not held steady with long-period Cepheids, but Bird is hopeful that with optical corrections for atmospheric anomalies, a relationship for long-period Cepeids can be worked out. Unlike Braatz's maser method, however, the distances would still be approximate.

In an afternoon press conference, Karl Gebhardt (University of Texas at Austin) reported a new measurement that doubles the mass of the supermassive black hole at the center of the giant elliptical galaxy M87. Gebhardt, using a powerful supercomputer called Lonestar, took a larger view of galaxies with black holes and their interaction with dark matter 'halos' at their edges. He is suspicious that previous models used to measure black hole masses were wrong, because they failed to include information that would result in a larger mass of stars in the galaxy, which would influence the perceived masses of the stars orbiting the central black holes.

Gebhardt’s new calculations show larger masses for black holes, with the black hole in M87 tipping the scales at 6.4 billion suns, roughly 2 to 3 times larger then previously thought. This would help to resolve the observed difference in mass between the large and faraway black holes in quasars and those in galaxies closer to us, which have generally appeared smaller.

On Tuesday morning, Jin Koda (State University of New York, Stony Brook) presented observations of colliding galaxies done with the 8-meter Subaru Telescope in Hawaii. Wide-field infrared imaging revealed outlying tidal debris in several well-known systems, such as the Antennae and Arp 220. “We did not expect such enormous debris fields around these famous objects,” says Koda, who likened this debris to skid marks on a road. This allowed Koda’s team to track the past interaction of these galaxies. He also suggested that these outlying collision areas may be ideal for star formation.

Also on Tuesday, Alan Stockton (University of Hawaii) described his study of galaxies that existed when the universe was only 20% of its current age. His team used the adaptive optics system on the 10-meter Keck II telescope to filter out atmospheric disturbances to get a very clear look at these faraway objects. Surprisingly, these galaxies were already filled with old stars, suggesting that most stars had already formed by 500 million years after the Big Bang. Many of the galaxies had disk shapes, which are fragile and would have been disturbed by galaxy interactions. This implies that large galaxies formed very early in the universe’s history.

Valerie Daum is an intern at Sky and Telescope