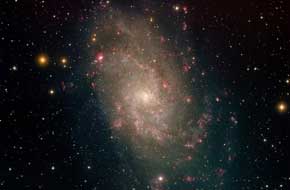 The black hole at the core of M33 (the Triangulum Galaxy) is a lightweight, with a mass roughly 1,500 times the mass of the Sun. The galaxy's spiral arms emerge from its core at a very loose angle of 42°.

For several years astronomers have believed that the more massive a galaxy's central black hole, the larger and more massive the bulge of stars at the core will always be. But now it turns out that this rule, an excellent fit in most cases, doesn't apply in all. A recent survey of 32 flat, bulgeless galaxies by the Spitzer Space Telescope showed hefty black holes in seven of them, throwing the theory into question.

Yesterday at the 212th meeting of the American Astronomical Society in St. Louis, a team led by Marc Seigar (University of Arkansas at Little Rock) proposed another method of estimating the mass of black holes at spiral galaxy cores: the larger the central black hole, the tighter the galaxy winds its spiral arms around itself.

Seigar's group looked at images of 27 nearby spirals for which the mass of each central supermassive black hole is already known by other means. They noted that galaxies with the biggest black holes have tight spiral arms, emerging from the central bulge at angles of about 7°. But galaxies hosting smaller central black holes have looser spiral arms, with angles of up to 43° where the arms and the central bulge meet.

The next step is to expand this study to larger numbers and to look beyond the local region by examining galaxies at cosmological distances. Seigar expects that really remote galaxies, seen when the universe was significantly younger, contain smaller supermassive black holes than what we see in closer locales.

He went on to speculate that the main factor in determining the mass of a supermassive central black hole could well be the amount of dark matter concentrated in the galaxy. But at the moment he's more interested in ensuring that the simple relationship between spiral arms and black hole mass doesn't change as he studies galaxies up to 5 billion light-years away.