"Black Rain" on Callisto and Ganymede

Computer simulations show that tiny particles drifting inward from Jupiter's most distant moons — tiny bodies with oddball orbits — could have darkened the surfaces of the two biggest Galilean satellites with deep drifts of dark debris.

At the close of the 19th century, astronomers thought the baker's dozen of known moons around the outer planets were an orderly lot. But that changed with the discovery of Saturn's Phoebe (1898) and Jupiter's Himalia (1904), Elara (1905), and Pasiphae (1908) — all having oddball orbits located nowhere near their planet's equatorial plane. In fact, Phoebe and Pasiphae were even moving retrograde, backward with respect to everything else. 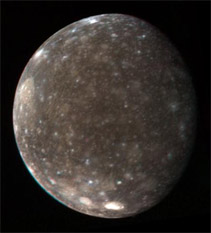 Voyager 1 recorded this view of Callisto in March 1979. Despite being mostly ice, this Jovian moon has a very dark surface. Bright spots, from relatively recent impacts, contain more clean ice than the generally "dirty" tyerrain surrounding them. Click here to see a larger view.

Since then the number of these distant "irregular" moons has mushroomed, and they now dominate the tables of each planet's retinue of known satellites. Most dynamicists believe these were stray objects, probably cometary in nature, captured early in solar-system history by their respective planets.

Meanwhile, the two Voyager flybys in 1979 showed Callisto to be a dark, heavily cratered world that has likely been geologically dead for eons. Curiously, Callisto's reflectivity is only about 19% — even though its surface should be largely water ice. Something has contaminated the ice. Several planetary scientists suggested that carbon-rich debris from the outlying irregular satellites was somehow involved. Others proposed that Callisto's surface ice is slowly sublimating away, leaving behind a veneer of carbon-rich rocky matter.

The case for imported contamination got stronger in the mid-1990s, when the Galileo spacecraft showed that deep drifts of dark material mantled the giant Jovian moon Callisto and, to a lesser extent, neighboring Ganymede.

A few years ago an international team led by William Bottke (Southwest Research Institute) calculated how much bigger the irregular satellites might have been initially and how much they've been ground down over time. The numbers suggest that some 50 million billion tons of small particles, coffee-ground size and smaller, have been winnowed away. 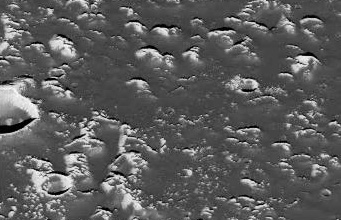 Dark drifts blanket the surface of Callisto in this Galileo image from November 1996. Small craters are almost completely absent. This view shows features as small as 200 feet (60 meters) across.

A subtle sunlight-induced effect called Poynting-Robertson drag causes these bits to slowly spiral toward Jupiter. But before getting swallowed up, many of them run into Callisto first, especially the bigger ones. A lesser amount ends up running into Ganymede, and some even coat the surface of Europa.

As Bottke and his team report in a forthcoming issue of Icarus, this "black rain" should have blanketed the oldest terrains on Callisto to depths of up to 450 feet (140 m), a close match to what's seen in Galileo's detailed images.

Ganymede should have gotten a veneer about a fifth as thick, perhaps 100 feet (30 m) of the stuff. "These depths are actually seen on the oldest terrains, which are as densely cratered as Callisto," Bottke points out. Elsewhere the coating is thinner, but those regions shows signs of past geologic activity. Perhaps, he speculates, the dark material there was diluted or partly removed. 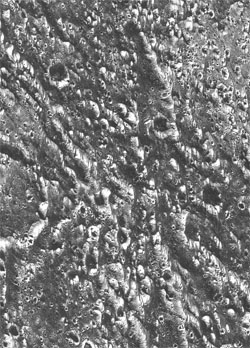 A portion of Ganymede's heavily cratered Galileo Regio, which is probably several billion years old. Yet this terrain shows far less dark mantling than Callisto does. The area shown is 29 by 40 miles (46 by 64 km).

Another issue is how the material is distributed globally. "Our calculations suggest we would expect to see a big preference for dark debris on the leading faces of these worlds compared to the trailing faces," Bottke says, dozens of times deeper on the leading hemispheres, in fact.

But the actual distribution is more uniform. "Assuming our model is right, we suspect the easiest answer is non-synchronous rotation for all of these worlds" early in solar-system history, when most of the debris was drifting inward.

Europa should have a dark layer at least 35 feet (10 m) thick, but it's not there — at least not topside. The simplest explanation is most of the "black rain" has gotten churned into the interior by the active geology that continues to reshaped this moon's surface. Conceivably, the researchers speculate, some of the dark stuff could have reached Europa's subsurface ocean, infusing it with organic compounds such as amino acids.

As Bottke's team notes, similar infall was and is occurring around Saturn (particularly from Phoebe), and both Uranus and Neptune should have once possessed extensive sets of irregular satellites. The researchers plan to follow the "dirt trails" in these systems in future work.

I had thought that slow sublimation of the ice over the eons of inactivity was considered a possible cause of the deposits, much as snow drifts slowly blacken when they sit around for weeks: the ice vaporizes leaving a coating of the embedded dark dust. Unlike at Saturn's distance where it is so cold that sublimation of the moons' surfaces is likely negligible, areas on Jupiter's moons under direct sunshine could get as warm as 160 degrees Kelvin.

Both the sublimation and collection effects should show dependencies on latitude from the equator to the poles, and so some modelling how both effects would vary with latitude might be in order.

In the Feb. Sci-Amer, a moon formation theory is described in which particles migrate outward from a planetary ring. The particles migrate outward due to tidal effects of the planet rotating beneath them. Here, we have particles migrating inwards due to Poynting-Robertson drag. So which really happens? Obviously, tidal effects will predominate on the larger objects, causing them to spiral outwards, while radiation will prevail on smoke-sized particles, causing them to spiral inwards. But what is the size that determines the dividing line between contraction and expansion? If they do not say in their calculations, we can only assume they neglected tidal effects. Also, what is winnowing away the 50 million billion tons of “coffee grounds”?